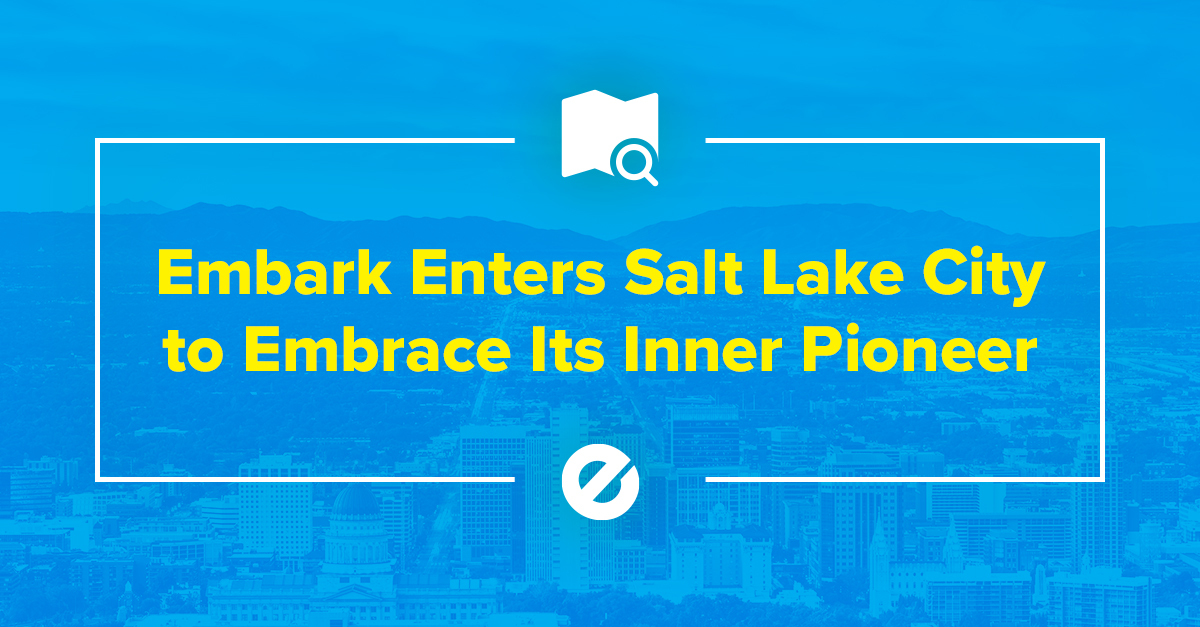 Salt Lake City is a study in contrasts. Mother Nature’s finest work surrounding tall and shimmering buildings, an innovative and forward-looking mindset mixed with a true pioneering spirit – it’s fair to say that SLC is many things to many people. And given the dynamic growth the city has experienced in the last decade, we’re not the only ones to sit up and take notice of everything Salt Lake has to offer.

Okay, we might have buried the lede on this one – Embark’s now in Salt Lake City! – but we can’t help ourselves. SLC has long been on our radar thanks to those compelling contrasts, along with roughly one million other factors, of course. So, needless to say, we’re absolutely delighted to not only announce our entry into this vital market but, just as importantly, introduce the Embarkers leading the charge – Mike Romney, our newest SVP of Market Development, and Sam Sorensen, Embark Senior Director extraordinaire.

Success Starts at the Top

If you’re at all familiar with our perspective on leadership, our people, and our culture, then you already know what we look for in an Embarker. An entrepreneurial mindset, extraordinary knowledge and skills, empathy and motivation for miles – you know, the best of the best.

And we’re elated to tell you that, without an ounce of hyperbole, we might as well have been describing Mike Romney with that previous sentence. Mike has the sort of varied background and expertise that makes him a critical piece of the ever-evolving Embark puzzle and, therefore, ideal to lead us into the SLC market.

A BYU grad with a degree in accounting, Mike’s career began with Deloitte, where he amassed considerable Big 4 know-how that serves him well to this day. However, his innate curiosity and need to innovate eventually kicked in, leading Mike away from the Big 4 and directly into a series of highly-successful entrepreneurial endeavors over the next 17 years.

During that time, he also went back to school to earn a Masters degree from the University of Michigan – Go Maize and Blue! – ran startups, sold a business to a PE firm, and helped companies big and small find their footing and thrive.

Now, did we skip over a few things here and there during that nearly 20-year span. Yep. But you get the idea.

Still, it’s not just a matter of two successful paths gravitating toward one another that draws Mike and Embark together. Instead, it’s a shared belief that a seamless work-life integration, driven by a sincere devotion to culture and amazing people, propels you to the top.

The Other Half of Our Leadership Duo

As ecstatic as we are to have Mike onboard, we certainly don’t want to give short shrift to Sam in our praise. He’s the other half of our dynamic leadership duo in Salt Lake and, given what an amazing Embarker Sam’s been the last couple of years, the Embarkification of SLC is inevitable.

Sam has a BA in accounting from the University of Utah – kismet! – and began his career with Deloitte, working with organizations big and small in technology, media, and telecom. Later, he served as a revenue manager and corporate controller for a software company in the DFW Metroplex, a move that would eventually cause Sam and Embark’s paths to cross.

Thanks to the fast paced, constantly changing nature of the industries he’s spent the bulk of his career in, Sam has a formidable skill set and library of knowledge in M&A, SOX implementation, and solving complex accounting issues. Even better, he’s an absolute natural with building relationships and mentoring work associates, making him an obvious choice to guide the SS Embark in Salt Lake City.

That brings us to the market itself. With Mike and Sam behind the wheel, we fully expect to hit the ground running, lending our accounting and finance expertise to businesses across SLC. Because the fact of the matter is, despite its extraordinary growth in the last decade, Salt Lake City is still a vastly underserved market. But we’re going to fix that.

And how we’re going to fix that is with SLC talent. Sure, we’ll bring Embarkers from other markets – Denver, Phoenix, Oklahoma, Austin, Houston, and Dallas – when needed. But just as we’ve done with every new office, our focus in Salt Lake is on blending ourselves into the business community, and that starts with a foundation of SLC-based talent.

Case in point – Mike went to school in Salt Lake and has raised his family there. Sam also went to school in Utah, recently returning to his old stomping grounds. Further, we look at each of our new markets as an extension of our core rather than a distant satellite operating only by name as Embark. That’s not how we roll here, and never will.

So what does the future hold for Embark in Salt Lake City? Well, given its footing in the technology sector, we know that tech firms will play a significant role in what we do. However, beyond the ample business opportunities, what really excites us is the thought of assembling a powerhouse team of SLC Embarkers that walk around with a perpetual, genuine smile on their faces.

Between a reasonable cost of living, fantastic universities, a family-oriented environment, and a veritable playground of hiking, skiing, and other romps through nature, Salt Lake City is Embark’s kind of place. And with Mike and Sam at the helm, we know it won’t be long until SLC businesses come to appreciate everything that makes Embark such a unique, game-changing partner. The future is indeed bright over the Great Salt Lake.