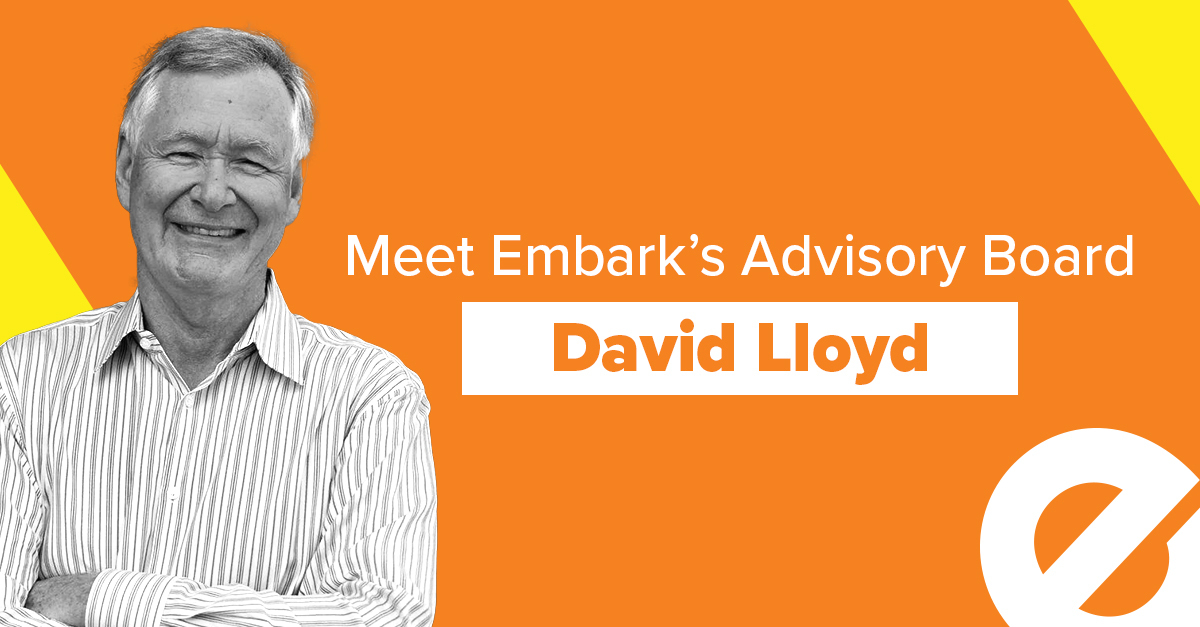 You can have the world’s foremost experts walking your company’s halls, but if you lack a coherent strategy for the road ahead, you’re still going to struggle. It’s a notion we’ve taken to heart here at Embark, consciously avoiding getting too big for our britches with an advisory board that keeps us grounded, on target, and with a perpetual eye on the future.

Even better, with a wealth of experience and insight like David Lloyd sitting on our board, Embark’s decision-makers have an ace-in-the-hole that helps us climb financial mountains and leap operational canyons. But perhaps the biggest feather in his cap is the undisputed fact that David is just a really great guy. So, on that note, let’s get to know him a little better and see what David’s all about.

When he was 18 years old, David emigrated from Ireland, beginning his long and storied career in the airline business at Newark Airport. It was tough work with long hours in the beginning, but he quickly learned how to get along with just about anybody, a lesson that continues to serve him well to this day.

Over the next ten years, he worked his way up in the industry in several different roles, ultimately making a move to the international hotel business as the Vice President of Administration for a Japanese hotelier. He would spend another decade in that dynamic industry, traveling all over the world designing, building, and operating luxury hotels. And that’s when the neon glow of the Vegas Strip came calling.

Needless to say, David segued to the casino and entertainment business, spending three years in Las Vegas working for Station Casinos. From there, he moved to Dallas – a critical event for this story – and worked as a Senior Vice President for a global tech firm, spent another few years in a dotcom, and served as an Area President for an international executive suite firm.

All Roads Lead to Consulting

Let’s step back for a moment and really take a look at David’s work experience thus far in the timeline. Pretty extensive, right? Over the years, he’s accumulated an immense amount of expertise across a variety of industries and roles, making his skill set extraordinarily valuable for companies and verticals of all shapes and sizes. In other words, the type of background that a consulting firm dreams about.

So that’s exactly what David did. He became a consultant extraordinaire, specializing in M&A and reintegration projects as well as turnaround work. But a consultant’s life – at least outside of Embark – is usually a hectic one, spent in distant cities and airport lounges waiting for connecting flights. And it just so happens that after the typical consulting grind started to weigh on him, David met a fine, intriguing chap named Paul Allen in Dallas. And Mr. Allen, in a twist you probably saw coming from a mile away, had just recently launched a new type of consulting firm called Embark.

David has been working with Embark since we were knee-high to a grasshopper, a new firm back then with roughly six consultants, still trying to find our legs. In those days, he served in more of a business development role, using his connections to help our young firm expand its relationships and client base, while also advising Paul on a one-on-one basis regarding a variety of topics.

Of course, when Embark decided to officially create an advisory board, that meant David was an obvious choice. Since then, not only has he provided excellent advice as we’ve grown – in terms of both footprint and people – but has also taken a hands-on approach when needed.

Case in point, when an Embark client was having difficulty finding a bank to process its PPP loan application, David went to work. Over the course of a few days, he called no less than 20 of his banking contacts, ultimately finding one that processed the application, despite the client not being the bank’s customer. And that’s just a recent example.

Honestly, we could use up a good portion of your bandwidth telling countless stories of David coming through for Embark in the clutch, either through his sage advice or by rolling up his sleeves and lending a hand. Since he’s also a business owner himself, he truly understands what it’s like to be the top of an organization’s totem pole. Coupled with his vast professional experience, intimate knowledge of M&A, and the myriad other attributes he lends to Embark and our clients, it’s easy to see why David is so essential to our success and growth.

David is a big believer in the ways we do things around here, and how putting our people and culture above all else – even profits – is the key to our growth. Who would’ve thought that you can build an incredibly successful consulting firm with no private equity that scales on a dime and provides top-of-class client service? Well, we did. And David, of course. Now, the rest of the market is sitting up straight and paying attention because we’re obviously onto something.

Down the road, David looks forward to watching our innovative business model kick into a higher gear as we approach 150 employees and continue to scale up. What’s the limit for Embark’s potential? Or is there even a limit? This is uncharted territory for the consulting industry, where talent and ethos reign supreme above all else. One thing’s for certain, though. With people like David helping to steer the SS Embark, we know we’ll always be heading in the right direction.