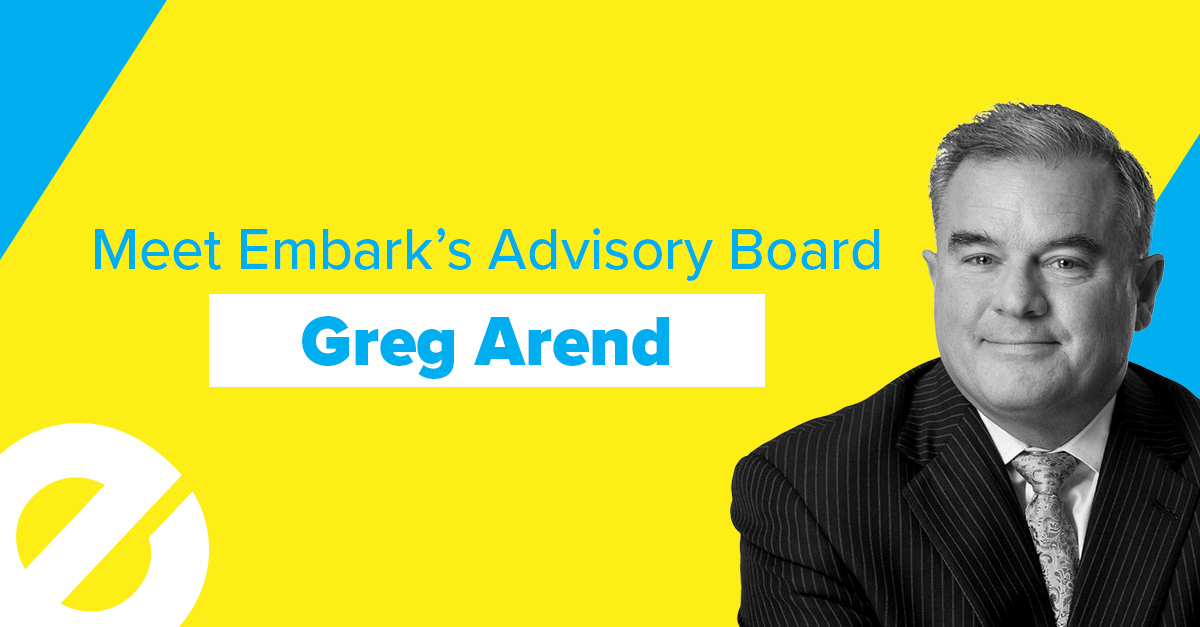 Business leaders don’t have a Bat Signal illuminating the sky, warning them that there’s trouble on the horizon. And there’s certainly no compass that decision-makers can follow to lead them to a company’s goals and objectives. Instead, smart and forward-looking leaders use the next best thing – experience – to help steer a company forward, through good times and bad.

That’s exactly why we started our advisory board here at Embark and, more specifically, why an experienced leader like Greg Arend is such a valuable member of said board and the overall Embark family. So let’s take a minute to get to know Greg a little better, why he’s such a valuable part of what we do, and what his guidance means for Embark’s road ahead.

It’s tough to imagine a background better suited to what we do here at Embark than Greg’s. And we mean that quite literally. Public sector to private, entrepreneur to Big Four, Greg’s experience is as varied and thorough in the accounting and finance space as they come. So to save you some eye strain while detailing each of the stops across his storied career, we thought it best to deliver the highlights.

As we said, that’s a pretty formidable background. In fact, we can count on one hand the number of resumes we’ve run into that are as expansive, thorough, and, in a word, impressive as Greg’s.

These days, with the Big Four grind behind him, Greg serves as founder and CEO of SOAR Partners, a consulting group in Tulsa. In Greg’s own words, SOAR focuses on “improving the outcomes associated with major societal issues that (he) believe(s) could be solved by non-traditional thinking and the added benefit of rapidly evolving and disruptive technology.”

Does that description subtly remind you of anyone you know? Maybe a rapidly-growing, Dallas-based consulting group dedicated to its people and culture? One that’s not afraid of doing things differently? We thought so.

Greg and Embark: A Perfect Match

Despite his sparkling background and experience, what we admire most about Greg is his absolute commitment to excellence. He’s a principled man that, without exception, does things the right way. No cut corners. No bending the rules. And all with a genuine passion for lending his expertise to others so that they can thrive.

Of course, his extensive knowledge of the Oklahoma market is a mighty feather in our collective cap as well. He understands the importance of the entrepreneurial spirit in his home state, how the massive yet underserved middle market plays such an integral role in the area, and, just as importantly, that the Oklahoma market has a gigantic void of highly skilled advisory services.

Put another way, Greg gets Embark. More accurately, Greg is Embark. He embodies what we hold as our best traits. He’s a champion for diversity and inclusion, working tirelessly to improve the lives and futures of those with intellectual disabilities – that also happens to be a peerless source of guidance for our leadership and vision.

Simply put, both Greg and Embark believe in a greater good. That just because something’s been done a certain way since the Triassic Period doesn’t mean it’s necessarily the right way. Greg loves our commitment to that ideal, as well as our steadfast belief that our people are the high-octane fuel that drives us forward at such great speeds. Obviously, Greg and Embark are a perfect match.

Given his experience and connections in both the public and private sectors, Greg will be instrumental in driving our growth. And, of course, being an Oklahoman, he’s also perfectly situated to help us expand further in the oil & gas space, an industry with specific needs that we already understand like the back of our hand.

Zooming in on oil & gas a bit further, there’s a distinct lack of turnaround and restructuring expertise in the low to mid-market section of the industry. Naturally, that’s right up Embark’s alley, and, with his extensive turnaround work during major crises, Greg will play a vital role in that area.

In other words, Greg is so much more than a key cog in Embark’s wheel. He’s a brand ambassador, business driver, and bottomless reservoir of insight. Needless to say, we’re lucky to have him on our advisory board, and can’t wait to see what the next few years have in store for our collective pursuits.