There’s no substitute for experience. It’s the most valuable of assets, giving a company the rare combination of insight and confidence to forge through a future covered in variables. Put another way, experience is the ultimate competitive advantage in a marketplace mired beneath a thick, blinding cloud of risk and uncertainty.

To that point, we’re going to let you in on a little secret – at Embark, we like having a one-up on the competition. It’s like holding a flashlight with a new set of batteries while everyone else is scrambling to find the light switch. That’s why we established our advisor board in the first place, and explains why we’re so fortunate to have a true business leader like Sandy Marger on Team Embark.

Sandy’s path to success isn’t your prototypical, linear progression from point A to point B. It’s a fuller narrative than that, spreading across varied industries and on a global stage. In fact, if you’re lucky enough to spend a few moments talking to Sandy about his background, you’ll find yourself at a unique intersection of Silicon Valley, Wall Street, and a TED Talk, with hefty dollops of a Hemingway novella thrown in for good measure.

Sandy grew up in Haiti – yes, he’s fluent in Creole – only to return to the US for high school. Later, while pursuing his undergraduate degree, he obtained his captain’s license and operated a motor yacht for a few years. Afterward, he officially began his career in a venture firm where he led global acquisitions, primarily in the real estate, construction, automobile, oil & gas, and energy sectors.

Along the way, Sandy grew to be very good friends with the chairman of that venture firm and enjoyed his time dealing one-on-one with high-level executives from corporations spread out across the world. But his domestic life was changing at the same time, where Sandy found himself married with four children in what seemed like a blink of an eye. For that reason, he wanted to downshift into an area that wouldn’t involve so much travel – or so he thought – and allow him to concentrate more on his family.

But, as the saying goes, the best-laid plans of mice and men often go awry. Soon working for a consulting firm specializing in oil & gas, Sandy found himself traveling non-stop. At last count, he’s been to 180 countries across the globe, with the majority of his time spent in Asia, Russia, Eastern Europe, Europe, and Latin America.

However, as challenging as all of that travel was at the time, that position proved to be instrumental in his foray into the Big 4, where his unique background, perspective, and insights were a breath of fresh air for an industry too often set in a traditional, narrow mindset. And it’s not a coincidence that you can use that very same description for Embark as well.

Sandy, Embark, and the Art of Doing Things Differently

Despite his exemplary background and the considerable knowledge base he’s developed over the years, there’s one aspect of Sandy that stands out most – and that’s really saying something. It’s his mindset. He looks at operations and management differently, and how a consulting firm should fit into that mix.

Consulting shouldn’t be transactional. A successful firm wants to be a partner, not a one-time solution provider. That’s a topic we’ve spoken of extensively over the years, and something we strive for every day here at Embark. The consulting firms that will come out on top are the ones with open ears and minds, continuously scanning the room to look for areas where a client needs help, whether it’s explicitly vocalized or not.

Naturally, that’s a notion that Sandy built a career upon. And quite a career it’s been. Despite being “retired” since 2018, he’s in no way ready to put all of that experience and expertise out to pasture. While he prefers to devote his time and energy toward being the best husband, father, and grandfather possible now – along with a borderline unhealthy obsession with boating – he still loves to lend his incomparable insights to companies that “get it.” Luckily for us, we at Embark do, in fact, get it.

Long story short, our relationship with Sandy began over a cup of coffee in Dallas a few years ago, and has grown into something that we really can’t put a price on. He loves our culture, team, leadership, and insistence on doing things our way, even when it flies in the face of industry standards. And we love his bottomless expertise and holistic view of consulting, a point-of-view that shines like a diamond every time he’s on the phone with an Embark client. Needless to say, when we formalized our advisory board, Sandy was an obvious choice, and we’re still incredibly thankful that he accepted the role.

Looking Down the Road

We understand that, at any given moment, there’s an ocean somewhere that Sandy would love to be on, preferably with a fishing pole in his hands. But he believes in what we’re doing, that our culture and people and two unique building blocks that really set us apart in the marketplace.

And since the flexibility to scale, adapt, and evolve is in our DNA, it gives us a leg-up to keep pace with the times. Looking down the road just a few years, when technologies like RPA and other automated wonders are the norm, companies won’t need rooms full of well-dressed consultants poring over spreadsheets as they have in the past. And that’s okay.

For a firm like Embark, where we’re equally adept with transforming finance functions as we are with accounting standards, we’ll always have our bases covered. And that, along with our culture and people, makes Sandy and other industry dynamos so enthusiastic about our future. We’re the partner that pivots and grows with you, and with advisors like Sandy helping to guide our way, the future is indeed bright. 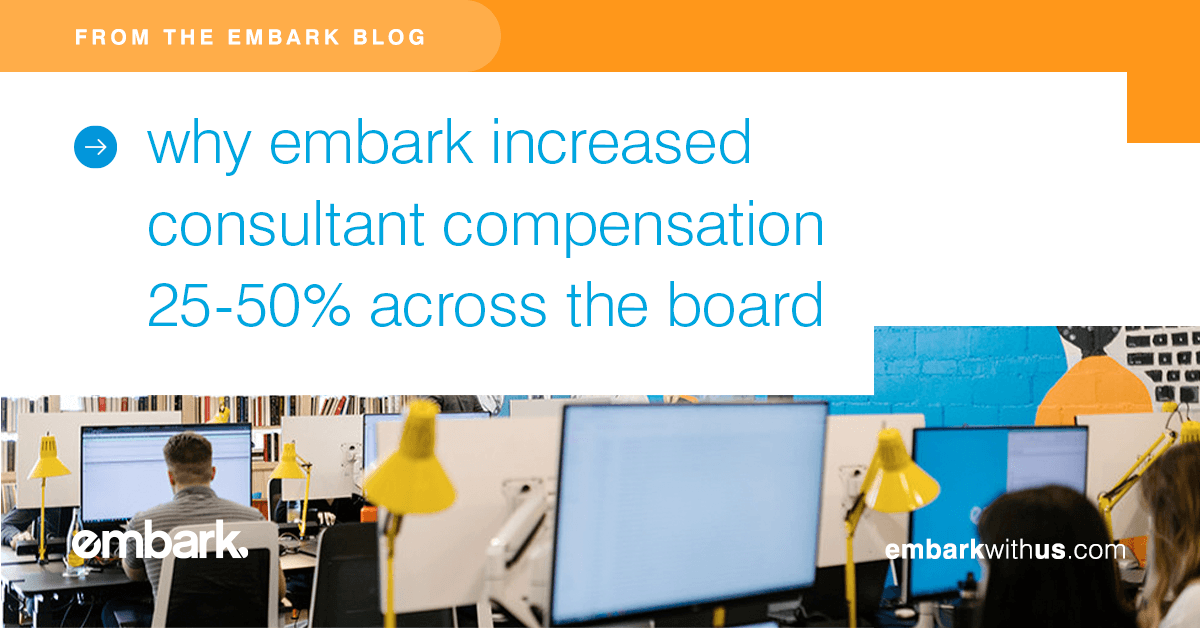 Why Embark Increased Consultant Compensation 25-50% Across the Board