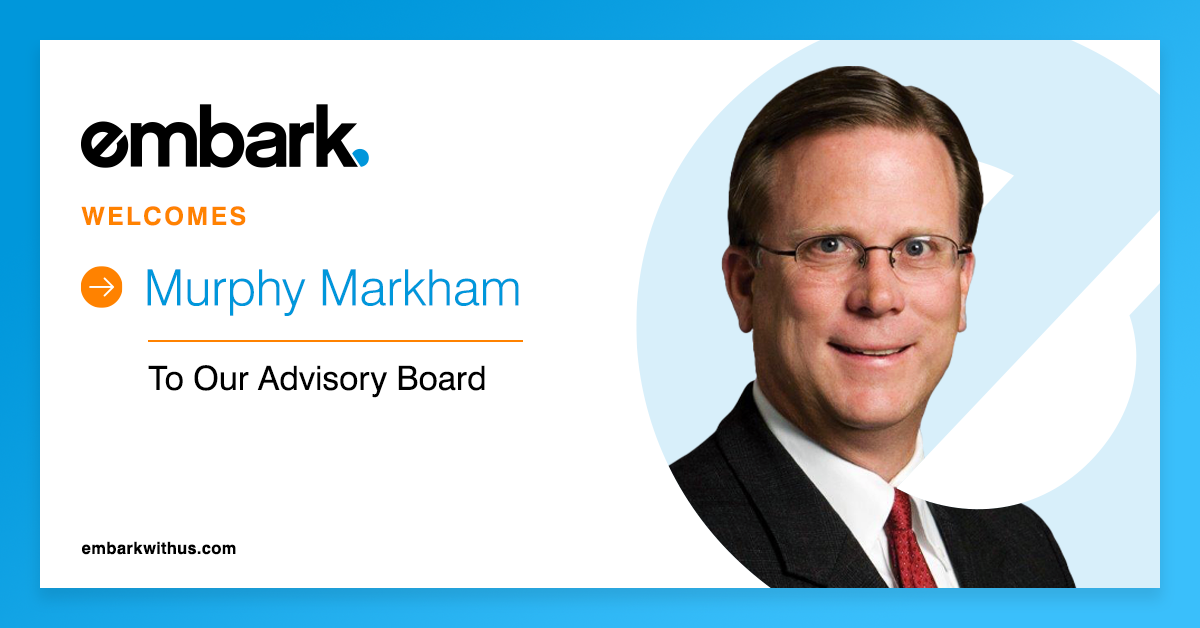 There’s no substitute for being able to say “been there, done that.” Experience is everything in business, creating the type of competitive edge leadership dreams about at night. That’s exactly why Embark’s advisory board is so essential to our success – it means we always have a sense of direction guiding us, no matter the environment or circumstances.

Therefore, being able to lean on the experience and expertise of an advisor like Murphy Markham is a powerful advantage that we thank our lucky stars for every day. So stick around for a few minutes as we tell you more about Murphy and what his perspective means to our firm and its future.

Murphy’s Lone Star roots run deep, from his education and throughout every stop in his remarkable career. After earning a BBA in Finance from Texas Tech, he began his career with Republic Bank. Murphy also attended night school in those early days, eventually earning an MBA from the University of Houston. Over the years, he would see Republic go through a seemingly constant series of mergers, eventually falling under the Bank of America umbrella.

He would end up staying with Bank of America for over two decades, having a front-row seat as the industry evolved from commercial lending into investment banking. Murphy’s career path followed a similar evolutionary path, transitioning from exclusively lending to the oil and gas sector to helping the firm build out an investment banking group in 2000.

Afterward, Murphy left Bank of America to run the oil and gas group for Bank One, aggressively building out its portfolio of oil and gas energy companies before JP Morgan acquired them in 2004. Once again, Murphy led the firm’s national oil and gas energy finance group, bringing his total tenure in commercial and investment banking to that point – exclusively in the energy sector –  to 25 years.

In 2006, Murphy made a career change, joining EnCap Investments, a private equity firm focusing on the upstream and midstream oil and gas space. Moving from managing director to partner to managing partner during his 15 years with EnCap, Murphy would ultimately play critical roles in seven E&P funds and four midstream funds before embracing a much-deserved retirement in March 2021.

Never One to Sit Still

“Retirement” doesn’t mean Murphy hung up his spurs, though. In fact, nothing could be further from the truth. Between a cattle ranch in West Texas, extensive work with charitable organizations around the world, and ten grandchildren, it’s fair to say that Murphy isn’t the type to sit still for very long.

However, as fulfilling as his retirement life has proved to be, all those years on the front lines of the oil and gas industry have made it impossible to completely walk away. Selfishly, we couldn’t be happier for the energy’s substantial gravitational pull, proving to be the driving force behind Murphy joining Embark’s advisory board.

A Perfect Fit for Embark

Simply put, the countless relationships Murphy established during his 40 years in the energy sector proved to be quite the siren’s song. Working with Embark allows him to maintain and expand those relationships – both personal and professional – while lending his expertise to a firm that, not coincidentally, also holds relationships sacred.

Murphy is a people person, plain and simple. He understands the value of forming lasting connections, building trust, and using those relationships to guide every decision.  And if that notion sounds remarkably familiar, that’s because it aligns precisely with Embark’s culture, ethos, and vision.

Of course, that’s not to diminish the incomparable first-hand expertise he brings to the energy side of our practice and services. Between Murphy’s seemingly endless list of connections and his boots-on-the-ground experience in oil and gas, he helps keep us on track while also providing fuel to propel us forward.

Suffice it to say, things have been especially volatile in the energy sector lately. And with so much more change on the horizon between the push for green energy and diminishing access to capital, oil and gas is entering uncharted waters.

But like any hardy seafaring tale you’ve ever heard, it’s the seasoned sailors that get the ship safely to port. That’s what Murphy is for Embark and, in turn, what our firm is for our clients – a genuine strategic partner to help energy companies navigate increasingly choppy waters. Thankfully, with people like Murphy on board, the future for both Embark and our amazing partners looks bright indeed.