SPAC Warrants: What the SEC Statement Means for Accounting and Reporting

So much can change in just a few short months. Throughout Q1 2021, special purpose acquisition companies (SPACs) were the belle of the IPO ball, generating splashy headlines on a seemingly daily basis. But then April hit and it felt like SPAC transactions fell off the public market cliff, going from 100 mph to practically a standstill. So what gives?

Most of the braking action concerns a staff statement from the good folks at the Securities and Exchange Commission regarding the accounting treatment and reporting considerations for warrants. And while that statement was certainly enough of a jolt for everyone to hit pause for a moment, it doesn’t imply SPACs are about to cave in on themselves.

As we’re about to explain, it just means many SPACs and their auditors have some work to do on the warrant accounting, valuation, and reporting fronts.

A Statement, Not Guidance, from the SEC

First and foremost, we want to clear up an important fact that somehow got lost in the SPAC initial public offering frenzy. The SEC did not, in fact, issue new guidance for SPACs. That’s FASB’s jurisdiction. As we said, the SEC staff merely issued a statement of their observations on the accounting and financial reporting for warrants.

ASC 480, the guidance on distinguishing liabilities from equity, and ASC 815, the accounting standard for derivatives and hedging, both relate to warrant accounting. However, neither has changed as a result of the SEC’s recent observations on SPACs.

In other words, the SEC only clarified and reminded people of the GAAP guidance that was already in place. Unfortunately, many SPACs misinterpreted the guidance and must now reevaluate their conclusions on those warrants, but more on that in a bit.

The point is, whether you’re a SPAC sponsor, investor, target business, or just passionate about business combinations, this isn’t the end of the line for SPACs, as someone might have inferred from the avalanche of media attention.

So now that we have that critical tidbit out of the way, let’s take a look at the ASC 815 guidance, what it says about these warrants, and what all of this means for everyone’s favorite blank check companies going forward.

The accounting issues stem from admittedly vague language in ASC 815. In essence, if you have an instrument that qualifies as a derivative, those derivatives are usually liabilities – but sometimes assets – on the balance sheet.

GAAP provides a scope exception to derivative accounting if the SPAC’s instruments are considered indexed to their own stock, while also meeting other equity classification guidance. To make this determination, SPACs would first evaluate the warrant’s contingency and settlement provisions to ensure they are acceptable under the guidance.

If considered acceptable – and they met other equity classification requirements – the SPAC would fair value the warrants at issuance and classify them as equity on the balance sheet. No ongoing updates to fair value were necessary in subsequent periods unless modified.

Pretty straight-forward, right? Well, unfortunately, many SPACs had two types of problematic provisions in their warrant agreements that fell short.

The SPAC warrant terms often contained different settlement provisions and amounts based on who held such warrants. The guidance permits any variability in settlement provisions as long as they relate only to an input used in a standard option pricing model. Who holds the instrument is not one of those inputs.

As a result, these warrants would fail indexation and not meet the scope exception to classify warrants as equity. Granted, not every warrant agreement and issuer will have such holder-specific criteria, but many do.

If that wasn’t enough, another section of ASC 815 adds additional equity classification guidance that a SPAC must also meet to avoid liability classification of the warrant. And this is where one particularly problematic provision for SPAC warrants stems from.

SPACs fell short of the guidance – as observed by the SEC – in net cash settlement terms within the warrant agreements. Basically, if an agreement included a net cash settlement, tender offer, or exchange offer provision, it would not preclude equity classification as long as all the underlying shareholders would also receive the same consideration as the warrant holders.

However, many SPACs had structures with multiple classes of common stock, yet only certain shareholders were eligible to receive cash with the warrant holders in such a transaction. In these instances, this provision inclusion would fail this second exception.

We understand that’s all a bit of a mouthful so we’ll rephrase it a bit more succinctly. Many SPACs were unwittingly ineligible for equity classification of their warrants, either due to the indexation guidance or a tender offer provision. Now, impacted SPACs must reclassify – in many cases restate – those warrants as liabilities rather than equity shares. And that means SPACs must also revalue the warrants each subsequent reporting period.

What the Warrant Reclassifications Mean for SPACs

While these events certainly aren’t the end of the world, they carry a few pain points for SPACs with them, both today and going forward, including:

Like we said, it’s enough to make someone grimace a bit but nowhere near enough to close up shop. However, between the new valuations, misstatements, restatements, memos, and audits, there’s just a lot of administrative tasks to take care of, not to mention additional costs. But that’s why partnering with a firm like Embark is such an asset during such times.

Our accounting gurus can address the restatements, memos, and other responsibilities suddenly staring most SPACs in the face. Also, in what might be the best news you’ll hear all day, our new Valuation Practice is now officially rolling. That means Embark is nearly a one-stop-shop for SPAC accounting and reporting needs now. And if you’re at all familiar with our unique brand of cost-effective expertise, that’s reason enough to jump for joy. 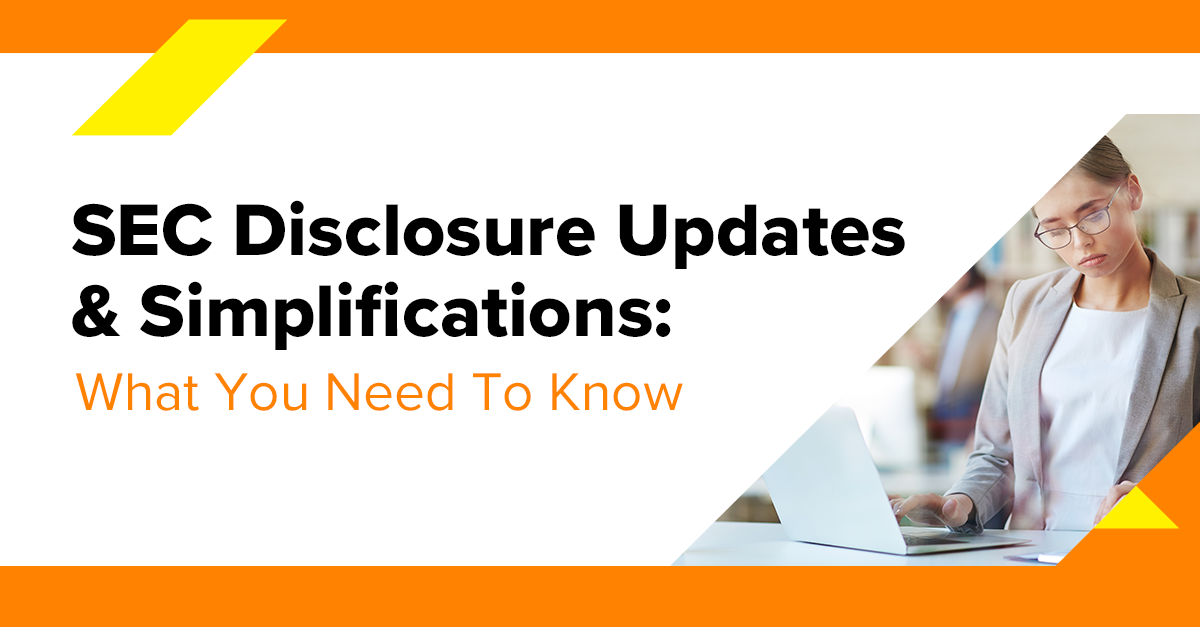 SEC Disclosure Updates & Simplifications: What You Need To Know 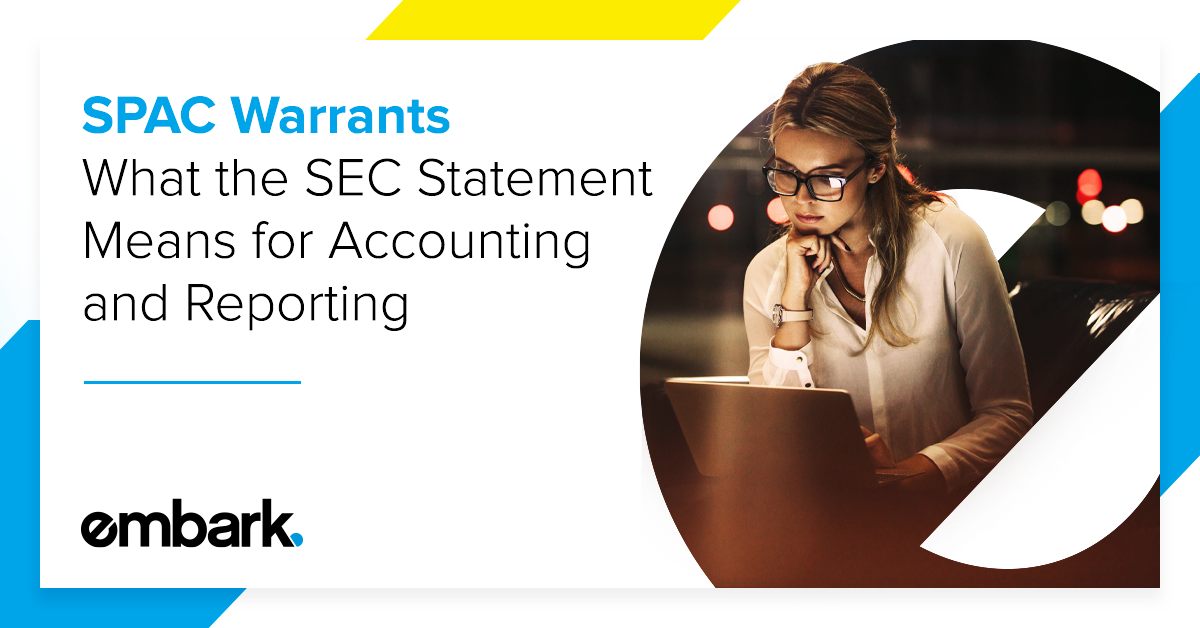 SPAC Warrants: What the SEC Statement Means for Accounting and ... 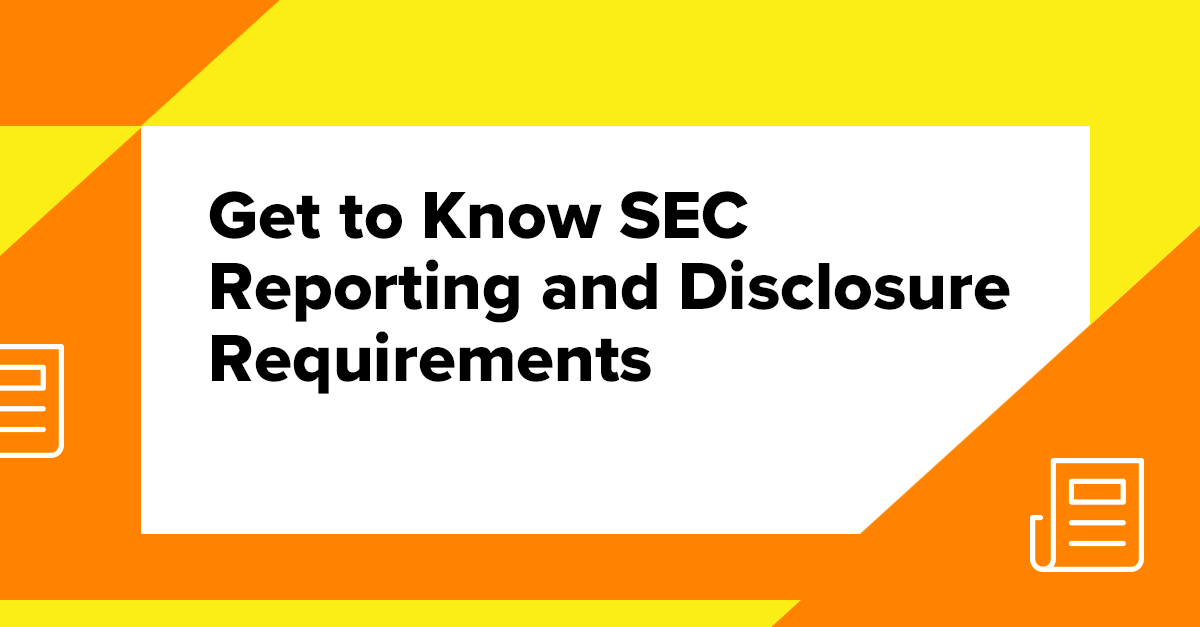 Get to Know SEC Reporting and Disclosure Requirements