Embark and Charlotte, NC: Kindred Spirits With a Bright Future Together

Have you ever met someone where it seems like you’ve known them forever? Where you share so many parallels, you’re practically completing each other’s sentences five minutes after meeting? That’s the spark Embark felt when peering into the eyes of Charlotte, NC for the first time. And given how that spark has only increased with time, imagine how thrilled we are to announce the Queen City of North Carolina as Embark’s newest market.

Just as importantly, though, we’ve also found the ideal person to lead our charge into Charlotte. So stick around for a bit and let us introduce you to Jon Wilkinson, our new SVP of Market Development, the city itself, and the amazing things in store for our firm and businesses across Charlotte with Jon at the wheel.

It’s not like Charlotte has been operating in the economic shadows for decades, only recently jumping out to surprise everyone. Far from it. The city has long been a hot spot for massive financial services firms, housing the headquarters of both Bank of America and Truist Financial – formed by the merger of SunTrust and BB&T – as well as Wells Fargo’s largest employment hub.

But Charlotte is so much more than a banking epicenter. The city is also home to everything from multi-billion dollar manufacturing conglomerates to countless small-to-mid-sized businesses, not to mention a burgeoning FinTech scene.

So what does that say about the business community in Charlotte? In a nutshell, it’s diverse and thriving, branching out from its financial and manufacturing roots to become a well-rounded economic force. To that point, the Brookings Institute recently named Charlotte the 6th fastest-growing large metro economy in the US, and 12th fastest over the last decade. Suffice it to say, the economic future in Charlotte is indeed bright.

A Robust Talent Pool and Fantastic Quality of Life

Of course, economic growth only gets you so far if businesses can’t find the talent they need to sustain it. And as you might have guessed, Charlotte shines on that vital front as well. With a major university within city limits – and several others just a couple of hours away – the city has one of the most vibrant young talent pools in the nation.

Likewise, with a notable Big 4 presence and considerable industry-based talent in the region, Embark won’t have to look far for innovative, experienced accounting and finance people. Naturally, such local talent will come in handy as Jon begins assembling his dream team of Charlotteans.

But Embark has never been an all-work-no-play kind of firm. Quite the contrary. In fact, we hold a seamless work-life integration sacred, making the quality of life for Embarkers just as important – if not more so – than any operational metric. And with Charlotte being the 5th fastest growing city by population in the US, the statistics make our point for us.

People are moving to the greater Charlotte area in droves thanks to a healthy employer base and appealing cost of living. Don’t forget about the seemingly constant real estate boom across the region, either, with new apartment complexes, condos, and single-family homes spreading like dandelions in a stiff breeze.

Collectively, these unique traits make Charlotte fertile ground for the innovative, people-driven brand of advisory services we bring to the table. Because we’ve said it before and we’ll say it again – happy people mean happy clients. And that provides a perfect segue to the person that will lead our future team of happy Charlotte Embarkers.

Meet Jon Wilkinson, the Ideal Embarker for the Job

Jon comes to Embark from PwC, where he spent the previous 12 years in Assurance in their Charlotte office, starting as an Associate and working his way to Director. The last three years veered from the traditional audit path in the best of ways, however, as Jon pursued and earned certifications in Intelligent Process Automation and Business Analytics while working to re-engineer PwC’s audit processes.

Combined with a Bachelors in Business from Covenant College and Masters in Accountancy from NC State, such expertise and experience on both the traditional and digital sides of the finance fence are perfect for Embark. Yes, we’ll always excel in critical service areas like technical accounting and reporting – amongst several others – but we’re also making significant waves with our digital transformation prowess.

That’s what makes Jon such a great fit for who we are today and where we’ll be in the future. And since he’s spent the better part of the last decade working with industrial manufacturing clients – not to mention fashion brands, entertainment, consumer goods, and others – his areas of expertise are as diverse as the booming Charlotte economy itself.

There’s more to Jon’s path to Embark than how well we align with Charlotte or even how his skillset complements our vision, though. As anyone who’s ever met him will attest, Jon’s a people person through and through, recognizing how essential a holistic, whole-human perspective on leadership is in today’s fast-paced, stressed-out world.

Given our people-centric, hospitality-driven approach to service, operations, and culture, it’s fair to say Jon’s personality and outlook fit Embark’s mission and vision to a tee. Just when you thought our future in Charlotte with Jon at the helm couldn’t get any rosier, right?

A Look Down the Road

If we play Armchair Nostradamus for a moment and peer into the future, we foresee a Charlotte business community that quickly gravitates to our unique approach to advisory services. Yes, there’s already a Big 4 presence in the region as well as a few smaller firms to compete with. However, we can’t help but really like our chances of hitting the ground running.

Just looking at our track record thus far, we have yet to stumble out of the new market gate, and we expect the same level of success from Charlotte. And then some. Because it’s tough to think of a city and leader that match our firm so well. So get ready, Charlotte business community, because we’re bringing the Embark flavor to this amazing city, and we know you’re going to love it. 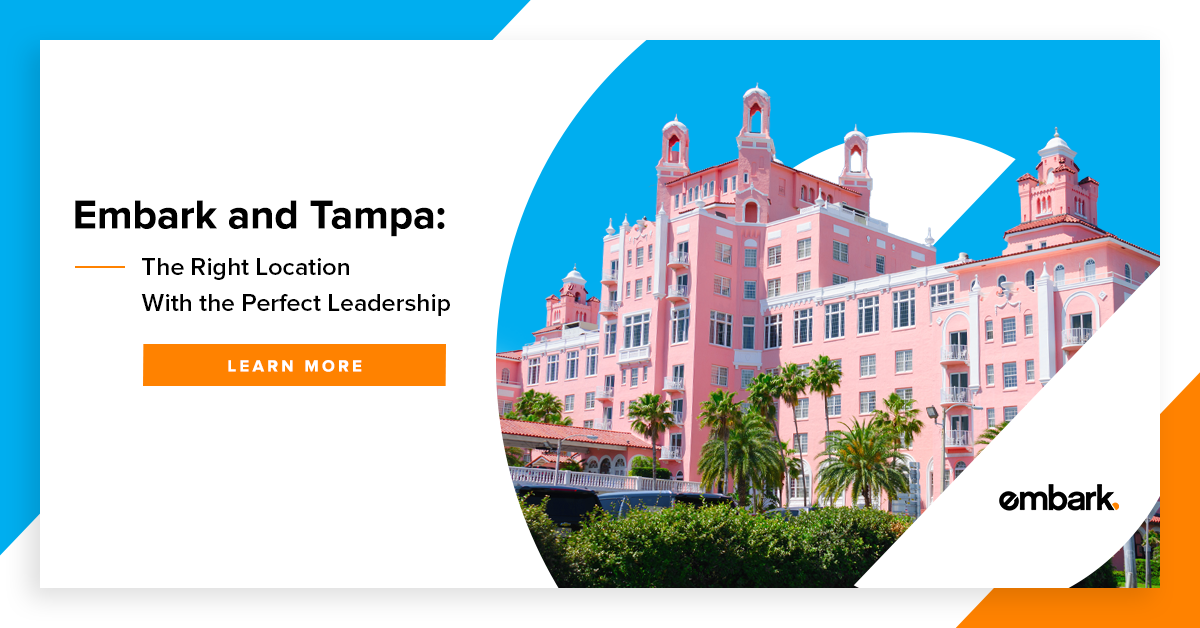 Embark and Tampa: The Right Location With the Perfect Leadership 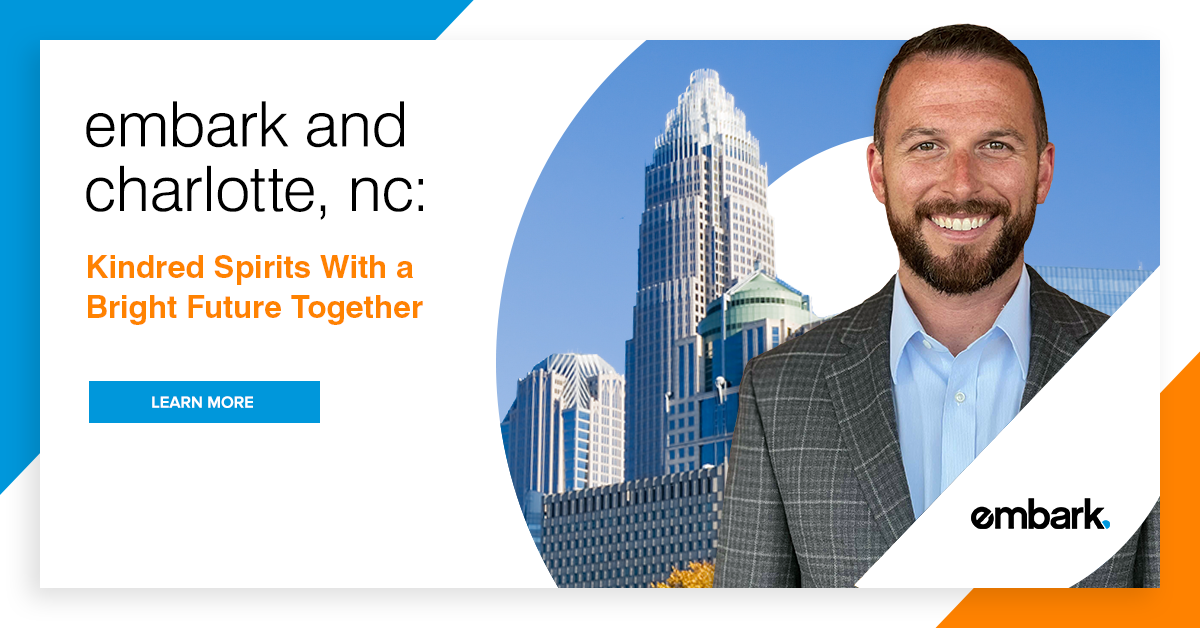 Embark and Charlotte, NC: Kindred Spirits With a Bright Future ... 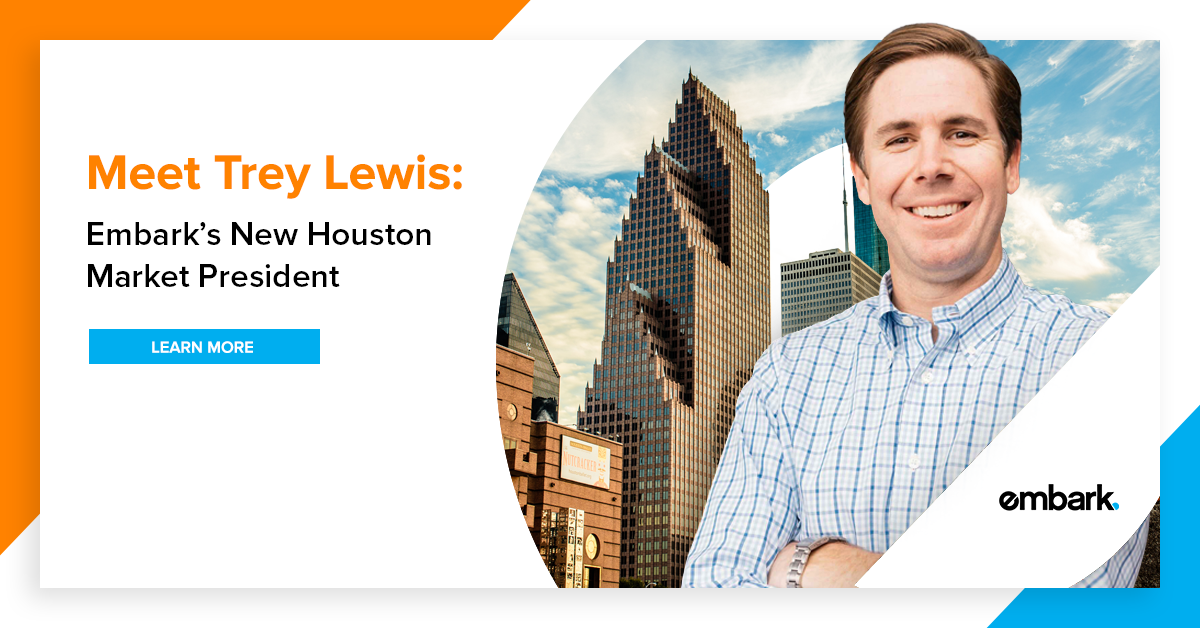