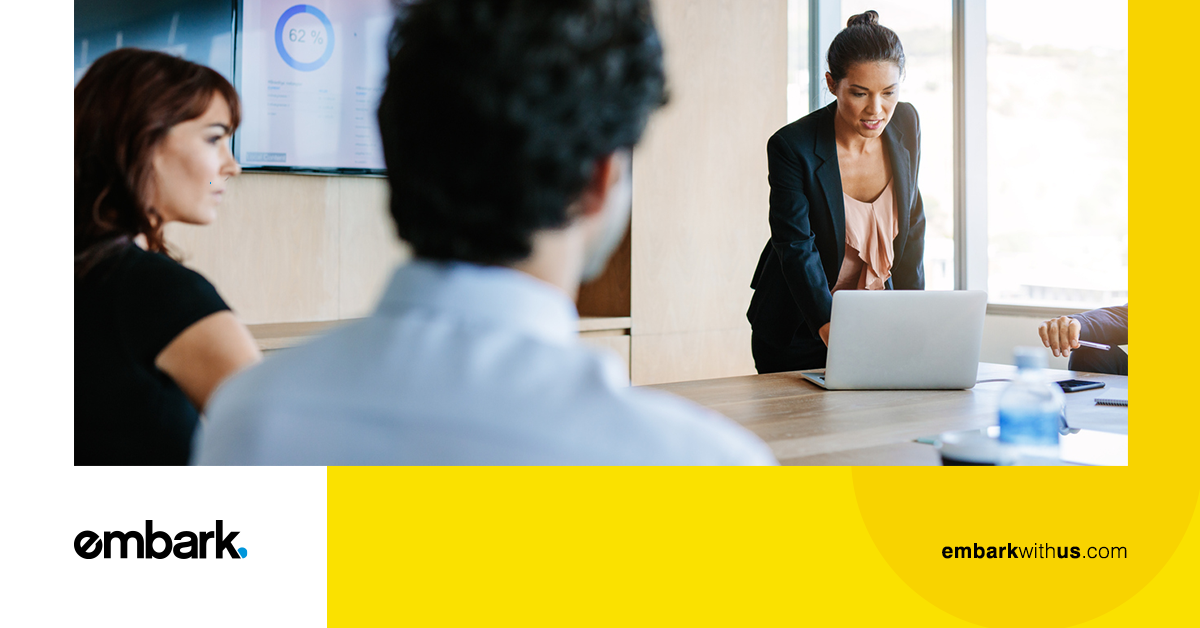 If only identifying the perfect acquisition target and coming to an agreement were the end of the mergers and acquisitions marathon. For your accounting team, however, that's just the point where they're lacing up their shoes and stretching out a bit. Whether you call it purchase accounting or acquisition accounting, there's still much work to be done after agreeing on terms, assuming you want to stay on the right side of the regulators.

But unless you have the time and patience to pore over the enlightening but lengthy guidance on business combinations, ASC 805, then making the necessary adjustments and accounting for M&As can seem a tad overwhelming. Thankfully, Embark understands that you still have a business to run, so, to that point, we've distilled the key points to an easily digestible, breezy, but highly informative little read. So grab your good pair of reading glasses and a beverage of your choice because here we go.

M&A is a Financial Brady Bunch

No, we haven't been hitting the bubbly at lunch. Think about it – with a merger or acquisition, you're combining two separate entities to live under the same roof, hopefully in harmony with one another. And as any random five-minute clip of the Brady Bunch proves, there's bound to be hijinx under such conditions.

But as you know, the FASB isn't a big fan of hijinx. Neither are investors, lawmakers, or your other stakeholders. That's what makes acquisition accounting so critical to the M&A process. In both US GAAP and IFRS, it provides a specific framework to fold the assets and liabilities of one company into another's.

Further, purchase accounting adjustments within the acquisition method are an essential mechanism that lets the acquirer revise the assets and liabilities of the acquiree to fair value in most cases, including inventory, fixed assets, and intangible assets. Such revisions are especially crucial for those pesky intangible assets since things like customer lists and non-compete agreements never even made it to the acquiree's books in the first place.

Therefore, when the acquiring company records them in their own books, it's the first time those assets are seeing the balance sheet light of day. Naturally, this will impact the acquirer's financials, along with other changes. Collectively, these altered values of the acquiree's assets and liabilities are known as purchase accounting adjustments, including, for example:

As you can see, many of these purchase accounting adjustments will impact the recognizable non-cash expenses for the acquirer in the future. In fact, those expenses can generate significant losses until the company has fully amortized the underlying intangible assets. Therefore, it's important to explain these losses in the financial statement disclosures to give investors some context behind them. Otherwise, they'll think the C-suite is asleep behind the wheel and leading the company into financial purgatory. And that's not good.

Sorting Through the Guidance: ASC 805

Up until this point, we've spoken in generalities about the acquisition method and purchase accounting, the role that adjustments play, and their potential impact on the acquiring company's financials. Now we want to take a deeper dive into the guidance and discuss what ASC 805, Business Combinations, has to say about accounting for such transactions.

The Basics: What's a Business Combination?

Naturally, when zooming in on the guidance for business combinations, it helps to understand how GAAP defines the term business in the first place. We won't belabor the subject since we've already discussed it at length but, to borrow our own words:

At the very least, a business must include both an input and a substantive process that, together, significantly contribute to the ability to create outputs. The guidance – updated with ASU 2017-01 – relies on best judgment to evaluate when an input and substantive process work together to significantly contribute to the ability to produce outputs, including businesses without current outputs.

But why is it so important to define a business according to the guidance? Because for a business combination to occur, the acquiring company must first determine if the target company is a business or a group of assets.

If a company determines that the acquired assets and liabilities don't meet the definition of a business according to ASC 805, then there's no need to continue reading this financial prose. That is, unless you happen to appreciate a good turn of phrase and some handy insights that might be useful for you down the road. ASC 805-50, Business Combinations - Related Issues, will tell you how to account for the transaction as an asset acquisition.

However, if the transaction does meet the criteria for a business combination, then you're definitely in the right place because we're about to look at the acquisition method of accounting, as required by ASC 805.

The guidance separates the acquisition method of accounting for a business combination into four basic steps.

You would think that this one would be obvious, but, as you already know, there's an awful lot of nuance in the accounting standards. For example, when two remarkably similar companies decide to merge, it's often called a "merger of equals." While that term might make for good copy in a press release, the truth is, there's really no such thing.

The guidance is very clear when it says that, in a business combination, one company is the acquiree and the other is the acquirer. But when you're dealing with, as we said, two remarkably similar organizations, how do you determine who's who? By control, that's how.

The acquiring company gains control of the other, as defined by ASC 810-10 – the direct or indirect ability to determine the direction of management and policies through ownership, contract, or otherwise. Further, an acquirer obtains control by:

If the guidance from ASC 810, Consolidation, isn't sufficient to ascribe control, then it's time to consider the factors in ASC 805-10-55-11 through 55-15. Needless to say, identifying the acquirer can require a lot of judgment in certain circumstances.

As you might've guessed, the acquisition date is critical for several reasons. First and foremost, it signifies the exact date that the acquirer obtained control of the acquiree, providing a baseline to calculate the fair value of the different assets it acquired, liabilities it assumed, and is key to determine goodwill created by the transaction.

The acquisition date also establishes the beginning of the measurement period, a time that can extend for a maximum of one year that may allow the acquiring company to adjust its initial accounting for the transaction. During the measurement period, the acquirer can gather the information it needs to properly account for the business combination, as outlined in ASC 805-10.

However, we urge you to proceed with caution regarding the measurement period since many companies fall prey to a number of common issues, including:

Once the acquiring company has determined the acquisition date, it's then time to recognize and measure the identifiable assets it acquired in the transaction as well as the liabilities it assumed. Note the italicized font we used on the word "identifiable." This step only includes the assets and liabilities that the acquirer and acquiree exchanged in the combination. In other words, it doesn't encompass anything stemming from separate transactions as outlined in GAAP.

It's also important to remember that, more often than not, the acquirer will end up recognizing some assets and liabilities that never made it to the acquiree's financials like, for instance, internally developed intangible assets. Further, the acquiring company must measure all of the identifiable assets and liabilities at fair value, with limited exceptions, as of the acquisition date, even net assets where a different entity retains a non-controlling interest.

For reference, fair value is the price that the acquirer would receive if it were to sell an asset or the price paid to transfer a liability in an orderly transaction taking place on the acquisition date between market participants. Most companies will use one of two common approaches to calculating fair value – a market approach based on something like a quoted market price, or an income approach that might rely on a present value calculation. In certain instances, a company may also utilize the cost approach as permitted under ASC 820 for some assets.

No matter what approach it uses, however, the acquirer should rely on observable inputs to calculate fair value whenever possible, minimizing its reliance on unobservable inputs. Regardless of whether an acquiring company bases its judgment on observable or unobservable inputs, the assumptions it uses should be consistent with those that a market participant would use. ASC 820, Fair Value Measurement, is the guidance for such endeavors, and is quite hefty in its own right.

Oftentimes, months can go by between the time two entities agree on a purchase price and actually seal the deal. Unfortunately, plenty of things can go sideways in the interim, exposing the acquirer to fluctuations that could negatively impact its benefits from the transaction.

Likewise, if the acquiree's NWC comes in above its target, then the acquiring company might pay the seller the amount in excess of the target as a price adjustment. The entities can also use similar adjustments based on things like assets and liabilities, income, and expense. Too much work, time, and resources go into a transaction only to see things go south at closing or shortly thereafter.

4. Recognize & Measure Any Goodwill or Gain from a Bargain Purchase

Finally, the last step in the acquisition method discussed in ASC 805 outlines how the acquiring company must calculate any goodwill created by the transaction. Although it's not nearly as simple as a single equation, this step essentially has the acquirer subtracting the fair value of the assets acquired and liabilities assumed from the amount it paid for the acquiree.

If, after calculating the goodwill, the acquirer finds itself with a negative balance, then the transaction might be considered a bargain purchase. This means that the acquiring company basically bought the acquiree’s net assets at a discount.

When an acquiring company believes it has a bargain purchase gain to record, it should first reevaluate the net assets acquired to ensure all the assets acquired and liabilities assumed have been identified and recognized, including any additional items not previously considered. While bargain purchases are the exception and not the rule, they're certainly common enough to keep in the back of your mind, especially if the acquiree is under financial distress and is selling just to keep the doors open.

Going forward, the acquiring company must stay mindful of any goodwill generated by the transaction, accounting for it according to the guidance from ASC 350. That's a topic we've discussed at length in the past, including goodwill impairment testing procedures, so make sure to familiarize yourself with this post-acquisition doozy to stay compliant.

We understand that these four steps are a lot to take in. But as you know, M&A is an inherently complex and dynamic side of the corporate world. If the term acquisition method is, in and of itself, enough to make you want to run and hide, though, your friends here at Embark are ready to lend you our expertise and experience on such matters. It's what we do.

Technical Accounting Subjects to Know for an Acquisition 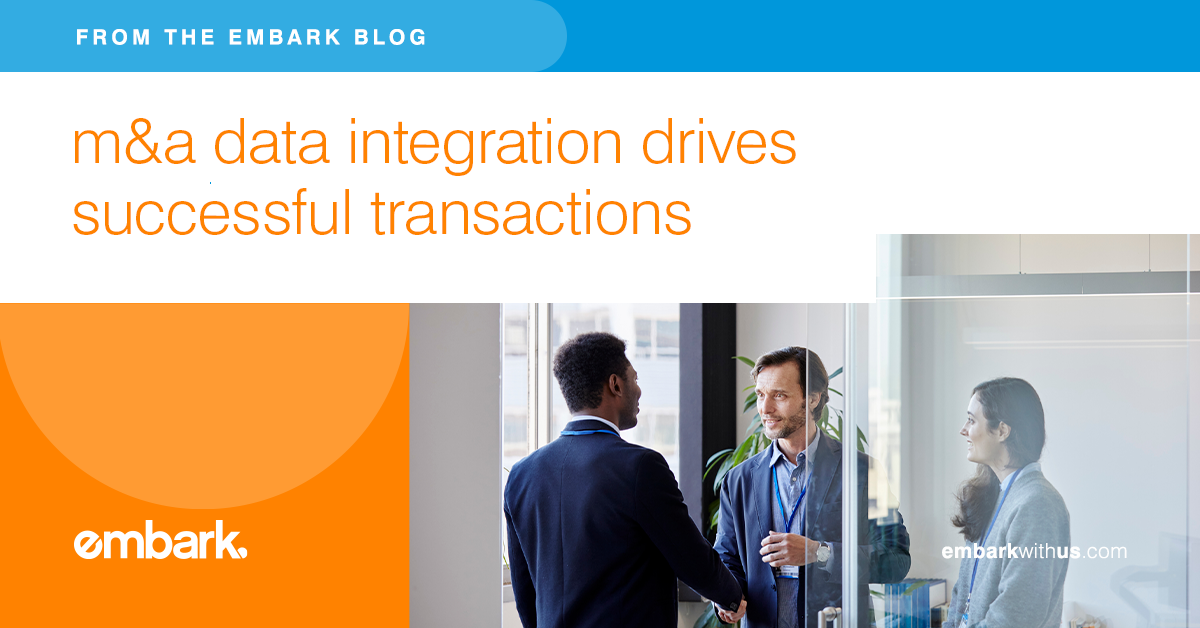 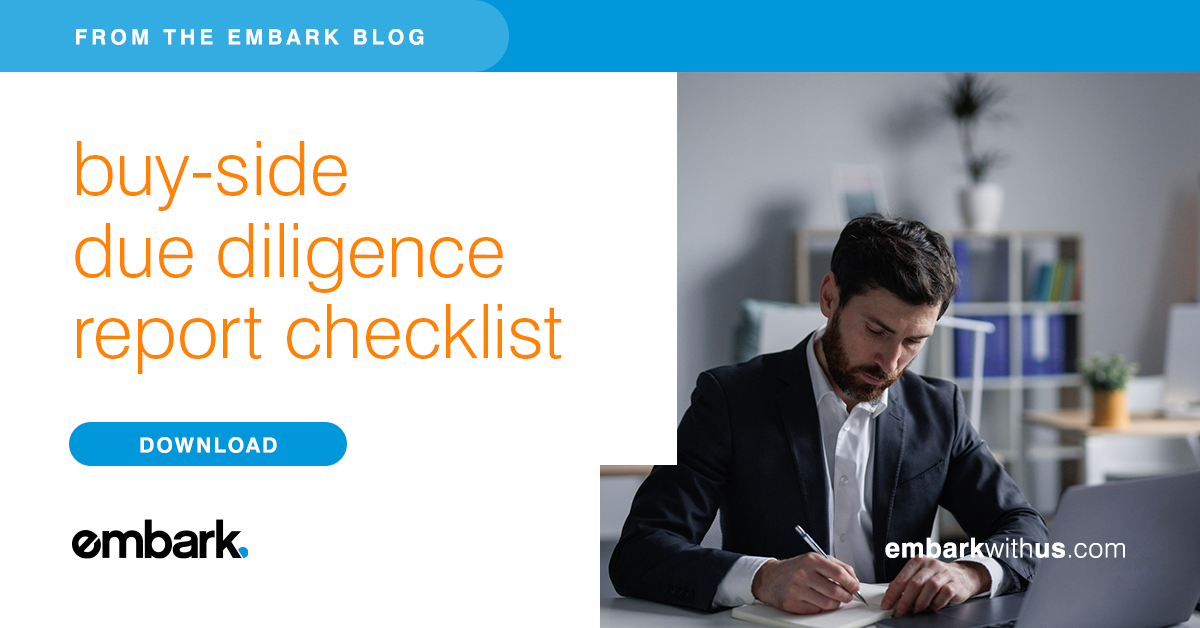 Buy-Side Due Diligence Report Checklist and Guide for M&A and Other ... 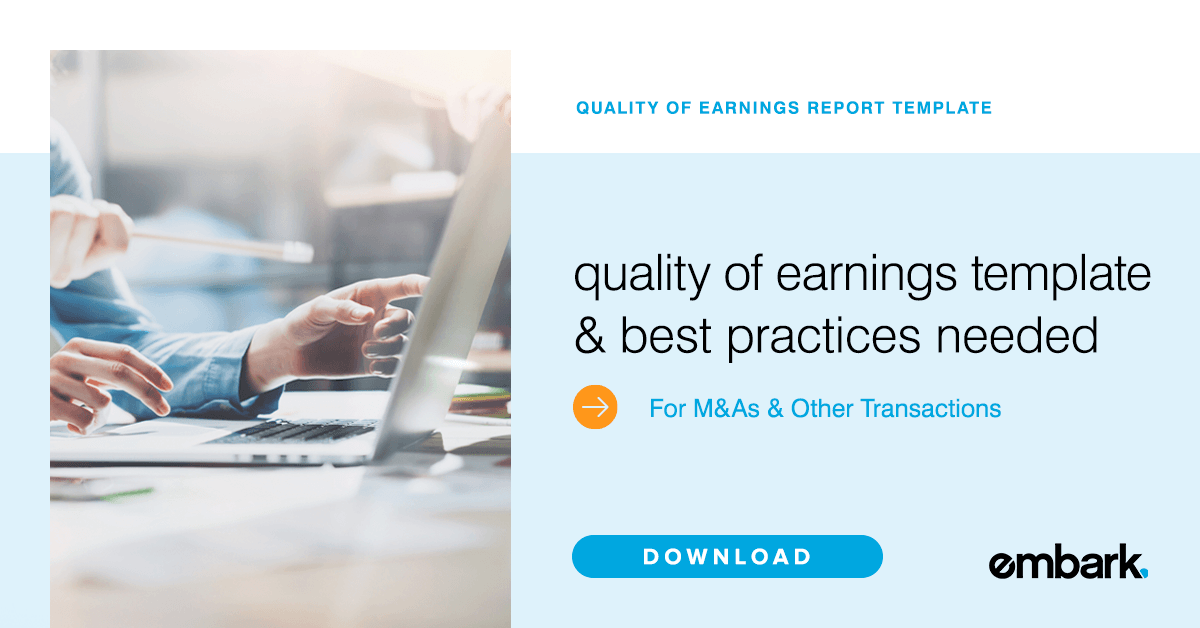 Quality of Earnings Template & Best Practices Needed For M&As & Other ...