Think about the term itself for a moment – finance transformation. A bit nebulous, right? Did Optimus Prime work in the banking industry for a spell? Or is there a new fad diet sweeping through accounting departments? No on both fronts, at least as far as we know. Instead, finance transformation refers to the data-driven evolution of the finance function, turning it into a forward-looking center of strategic thought that can propel an entire organization forward.

It’s a topic we discussed in-depth, examining how the combination of people, refined processes, and new technology is high-octane fuel for an enterprise. But it’s that last component, technology, that is usually the biggest question mark for CFOs and their teams. Which tools should you implement? And when should you implement them? Thankfully, given our experience and expertise in such matters, we’re going to answer all of those questions – and more! – for you, starting right now.

Before we jump in, we need to establish an essential caveat. Finance transformation is a process that builds on itself, relying on a particular sequence of steps for success. As tempting as it might be to immediately dive into the technology, you’re dooming the process to abject failure if you don’t have the critical building blocks in place first.

In other words, you need the right people and processes to support the technology, no matter how wondrous the technology might be. Think of it like buying a shiny new car – unless you have a driver and a tank full of gas, even the fastest, most advanced piece of automotive engineering won’t budge an inch. Of course, you can always put your new car in neutral, release the parking brake, and hope for the best, but the results will be disastrous. Perhaps even literally.

But that’s not to say that you can’t plan for the technology ahead of time, and that’s exactly what our focus is today. As you’ll see, we recommend implementing the technology in five phases, with each phase growing in complexity. We won’t say you’re taking baby steps because that implies the initial phases are of little consequence in the bigger picture. However, if you’re new to a technology and a data-driven finance function, it just makes sense to start with the simplest solutions and work your way up from there. Put another way, you need to get a feel for that lovely new car before letting it loose on a wide-open interstate.

Your technology implementation should begin at the lower rungs of the automation ladder, focusing on the business process side of your operations. Although your enterprise might already be a step or two ahead of this phase, it never hurts to make sure you didn't overlook anything critical to the process.

Start by looking at the technology you use for your back-office tasks. Sure, that MS Office subscription has served you well over the last 20 years, but a customized ERP solution will immediately infuse those tasks with new levels of efficiency. The trick, however, is to figure out where you’re beginning on the technology spectrum and which improvements will provide the most bang for your buck.

If you’re knee-deep in manual processes then, from a cost/benefit perspective, it probably doesn’t make much sense to immediately jump into a highly automated ERP system when there are plenty of pain points and inefficiencies to address at lower levels of the technology spectrum. Your front-line IT enablers can help identify those areas for improvement and drive change in your everyday processes. Solutions that can automate specific roles within your financial close management or payroll, for instance, can streamline those functions to increase speed and eliminate errors.

While those are just two examples, you'll want to take a similar approach with other tools that can automate tedious processes and tasks, particularly in accounting. For instance, data file management occupies much time and effort from your staff, but is now easily automated with tools that aren't necessarily part of the ERP.

Assuming you already have an ERP but perhaps find it incapable of streamlining some of the workflows and tasks that are particularly time and resource consuming for your team, then it might be time to look for an upgraded solution or, at the very least, bolt-on systems to enhance its functionality. No matter where you begin on the automation scale, though, it always pays dividends to look at improvements strategically, letting a cost/benefit analysis lead the way to greater productivity and efficiency.

The next step up in the automation technology food chain is RPA, robotic process automation. Instead of concentrating on the automation of simple functions or processes like in the previous step, RPA focuses on automating tasks specific to changing or moving data from one system to another or similarly manual tasks.

To accomplish this, RPA uses bots, or digital workers, to process transactions and analyze data, redirecting employees that most likely never liked all of that repetition in the first place. Just as importantly, RPA frees those employees from all that tedium to allow them to innovate, collaborate, and strategize. In other words, RPA can turbocharge all of these processes and more while increasing accuracy and innovative thought within your team.

We don't mean to imply that implementing RPA is an all or nothing scenario, however. Depending on the specific pain points you identified in the first step of this roadmap, an enterprise can take a surgical approach to RPA implementation. Some companies might want a full-scale deployment that automates everything possible, while others will only want to automate a particular process or subprocess.

Whatever route you elect to take, RPA isn't the type of technology you'll find at your local big-box electronics store. To maximize its effectiveness, you want to start with data that is neat, structured, and well-organized. Also, because it takes a significant amount of expertise to design and deploy the bots, this is an area where most companies will want to utilize specialists.

The next step in transforming your finance function builds on your RPA deployment, applying cognitive functions to the digital workers. This step is usually where eyes start to glaze over and attention drifts, typically from a lack of familiarity with the technologies involved. Embark assures you that this step, although admittedly advanced, is really just as straightforward as the previous ones – albeit with a sci-fi sounding vocabulary.

Cognitive automation is simply teaching your digital workforce – the RPA bots – how to read, interpret, and analyze data, ultimately making recommendations based on those functions by using certain cognitive functions.

Just like the previous steps, cognitive automation is again transferring specific functions from a human employee to a bot, only at a more advanced level than before. For instance, something like NLP can couple with OCR technology to quickly scan, analyze, and categorize stacks of analog documents that would otherwise take hundreds, maybe thousands of work hours.

In this example, OCR is the brawn side of the equation, recognizing the data and digitizing it. NLP is more finesse by extracting subtle data points that can easily get buried within the intricacies of human language. Enterprises can use this powerful combination of cognitive abilities to typed or handwritten documents in different languages, obviously giving the process an extraordinary boost in productivity and efficiency.

Cognitive automation also drives chatbots that provide a fast and convenient conduit between accountants and vital information that would typically require significant time and effort to retrieve. Instead of sorting through countless drives, folders, and files to find a piece of information, an accountant could simply ask the chatbots for assistance. Once again, this ability streamlines processes and saves the finance function valuable resources.

Artificial intelligence advances on cognitive automation by letting a bot learn and improve with time and use. Within a handful of years, enterprises will be able to readily apply AI to tasks like complex financial modeling based on dynamic variables – both internal and external. AI's ability to adapt on the fly will unlock an exponentially greater scope and level of accuracy.

Imagine being able to apply a tool like IBM's Watson to your forecasting or logistics, taking something enormously complex with ever-shifting data points and using AI to quickly and accurately make recommendations based on actual information. Just a few years ago, this type of technology still seemed far-fetched and patently futuristic. However, these capabilities will become the norm in the next few years, allowing enterprises to automate even the most dynamic functions within finance and its adjacent departments.

But what does that mean for your team’s future? Well, it means the time to familiarize yourself with AI is now, understanding what it can do for you, and to begin strategizing for a future that isn’t as far away as it might feel. That entails getting to know use cases, preferred vendors, and best practices to fully leverage the technology.

Just remember, while the term AI might naturally lends itself to visions of the future, it’s applications can be downright ordinary. Those same 1 to 2 minute tasks that you want to automate with RPA also lend themselves well to AI, just using machine-learning rather than coding to generate the results.

Also, since vendors and even use cases can change frequently in the space – and, meanwhile, you still have a business to run – partnering with outside expertise suddenly becomes a must-have. In other words, find a partner that understands both your company and the technology, and hold onto them for dear life because that’s just a big ol’ competitive advantage waiting to spread its wings.

While blockchain isn’t necessarily an “automation” technology – at least in the same way as the other technologies we’ve discussed – its unique ability to seamlessly secure your transaction-based processes means it fits into this spectrum like a glove. Or at least it will at some point in the relatively near future.

Through its distributed ledger technology, blockchain encrypts and categorizes data simultaneously across a network, verifying information as it goes. That means data is accurate and, since a user cannot change previously entered information, unassailable as well. The result is trustworthy, verifiable data that, for obvious reasons, is extremely beneficial in a highly regulated, the-devil-is-in-the-details type of environment.

Once it’s developed and distributed in a more market-friendly manner, blockchain’s ease-of-use and cost benefits will be like a fresh breeze blowing into your control sails. That means faster, more accurate audits thanks to crisp and clear transaction trails.

No, we’re not quite there yet in terms of a broad, go-to-market blockchain solution for finance and accounting departments. But given how quickly technology evolves, it’s a good idea to keep blockchain on your radar and be ready to strike when the right time and solution presents itself.

Be Patient and Deliberate

Now, will every organization follow the exact same path? Of course not. As we said, you might already be using RPA, for instance, and heading toward cognitive automation tools like NLP as the next step. However, just as the transformational journey builds on itself through people, processes, and technology – in that order – so do the specific tools you use.

Be patient and deliberate with your implementation, follow our phases, and don’t hesitate to reach out to those that have been there many, many times before. At Embark, we know our way around a finance transformation, and would like nothing better than to guide your finance function – and enterprise – to a more efficient, strategic, and successful data-driven future. 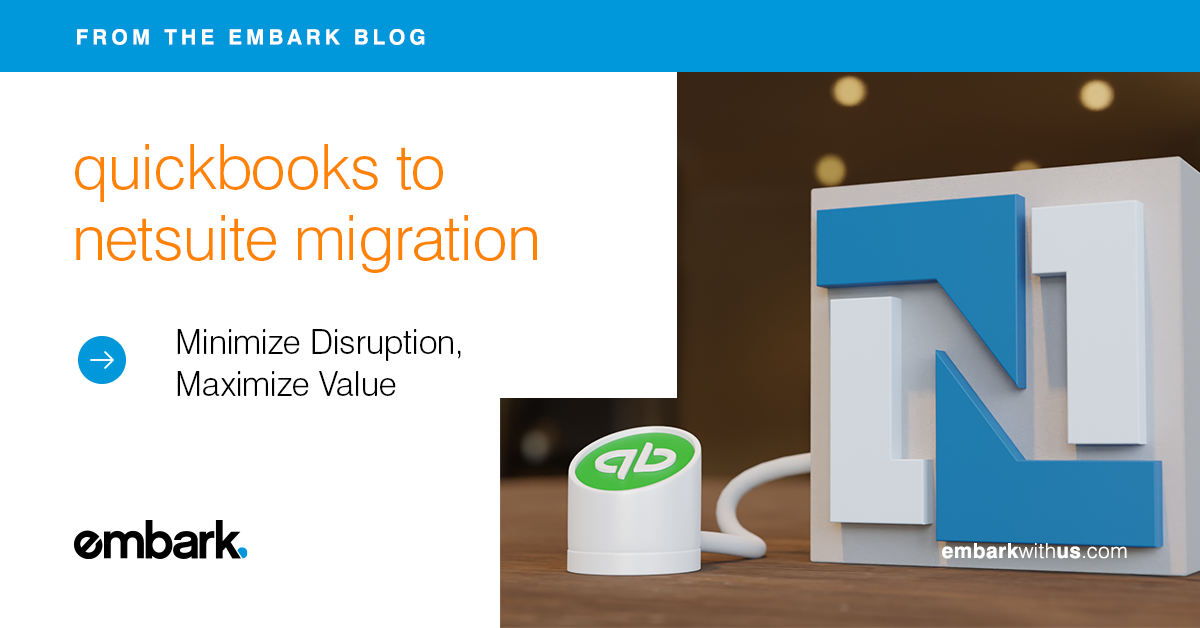 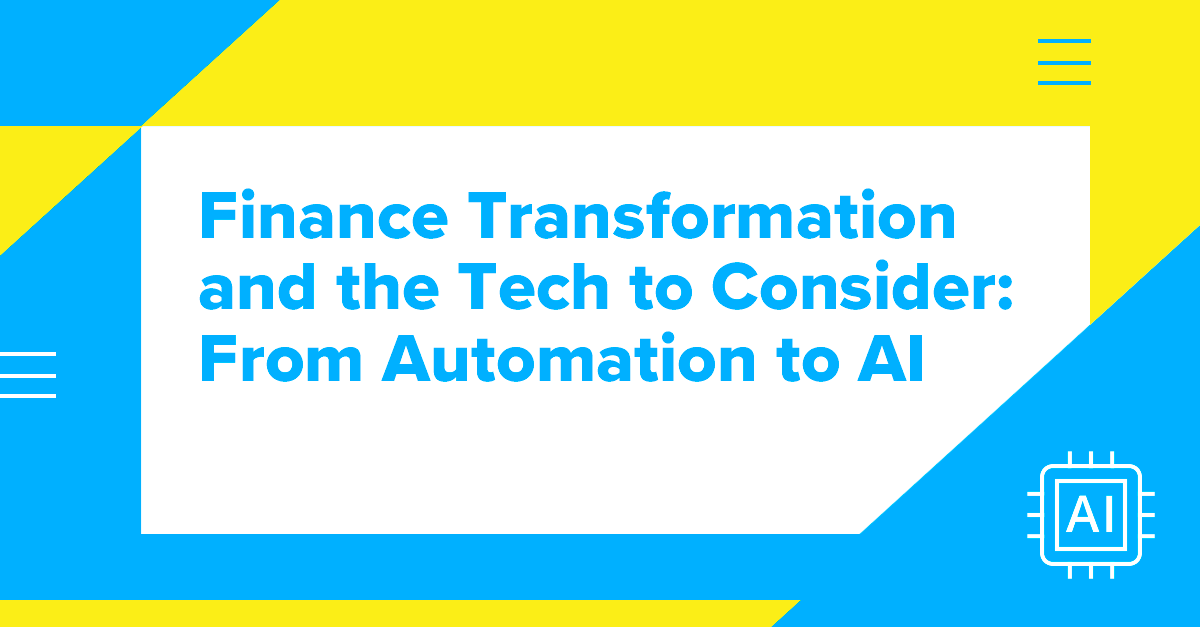