Understanding the Differences Between Consolidated and Combined Financial Statements 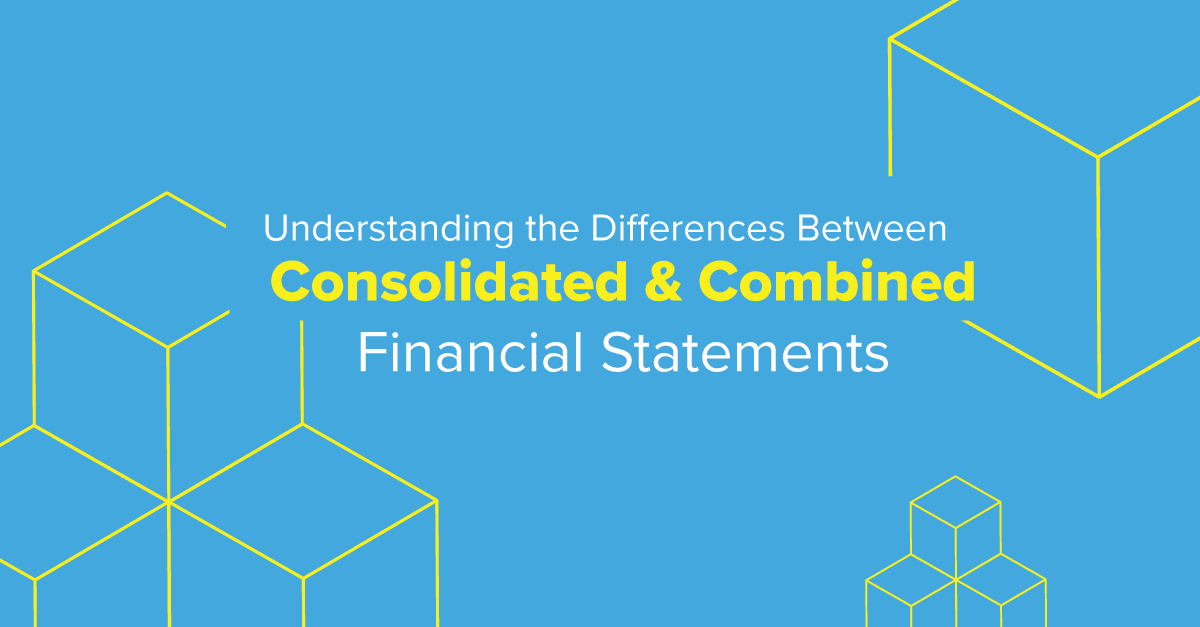 The terms consolidated and combined are pretty similar. We'd even venture to say they're synonyms in most cases. After all, you can consolidate/combine leftover pizza, Pokémon card collections, bank accounts, and a whole slew of other things. But when it comes to your company's financial statements, there's an important difference between the two, no matter how similar that might seem. 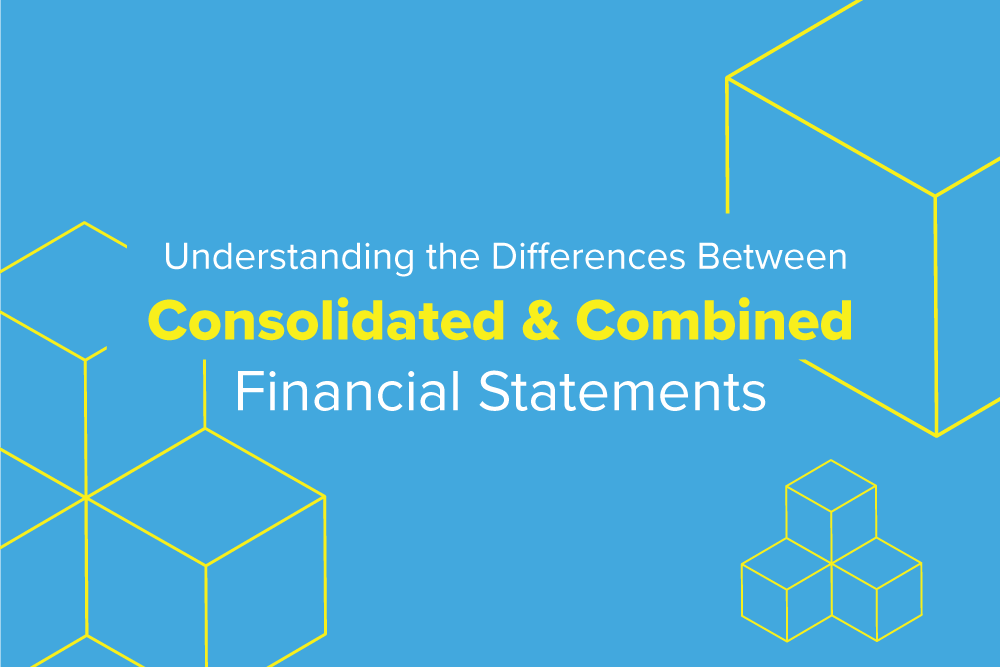 So to keep you on the straight and narrow, Embark thought it best to take a closer look at consolidated and combined statements – along with their cousin, special purpose financial statements – how they all differ, and when each is appropriate. Granted, you usually don't have a choice in the matter since the circumstances will dictate which to use, but knowledge is power and we want you to be as powerful as possible. It's what we do here at Embark.

Companies use consolidated statements when there's a group of entities made up of a parent company and its subsidiaries. They present the group as a single financial entity under the parent's banner and are especially useful for conveying the position and total results of the group as a whole.

Put another way, consolidated statements feature a specific legal entity, the parent, as the point of reference. They're prepared in accordance with ASC 810, which discusses how to consolidate the financials and when to use them. Consolidated reporting applies to a variety of different ownership structures, from 100% ownership to controlling interest to variable interest entities (VIEs). Companies most often use consolidated financials for SEC reporting and debt covenant purposes.

What a Tangled Web We Weave

So consolidated financials seem pretty straightforward, right? Well, they are, at least from a conceptual standpoint. Things can get a bit dicey, however, when the organizational structure starts to look more like a bowl of cooked spaghetti rather than a few straightforward pieces of corporate pasta, confusing even to insiders.

If that sounds familiar, just remember to maintain that guiding point of reference – the legal entity that the financials are being prepared for – because it serves as your directional beacon when figuring out what's consolidated and what's not. For instance, just because a parent is publicly traded doesn't mean all of its subsidiaries are, and those subsidiaries may not be consolidated even if they represent a large portion of the parent’s income or assets.

Or in some cases, maybe 60% of a company’s equity is public but the other 40% is some other form of ownership, perhaps a non-controlling interest. In these cases, if a transaction occurs between the two, the reporting entity – the 60% side – may record some effect that results from the transaction. It would not, however, record it directly at the reporting entity level as they normally would without the non-controlling owner.

If consolidated financials represent a solar system as a whole – a group of planets/subsidiaries in orbit around a star/parent company – then combined statements represent the financials for each of those heavenly bodies individually. It's only after the financials for every entity are complete that the group combines them into a single report.

It's also important to note that combined financials don't necessarily include a larger reporting entity operating as the star within the financial solar system. Often times, they consist of a group of individual planets held together by their common interests. Look, we're not astrophysicists here at Embark, but you get our drift.

There's another instance that approximates combined financial statements for SEC reporting purposes other than the common regulatory requirements. For financial statements filed with the SEC, there's a separate requirement when a company has equity method investments. This occurs when an equity method subsidiary is considered a Significant Subsidiary and exceeds the financial thresholds set forth by regulators. For a closer look into those thresholds, give Reg. S-X 17 CFR Section 210.3-09 a look.

If the equity method investees represent enough of the reporting company’s total assets, net income – or contributions to those subsidiaries are high enough – then the SEC registrant must file the investees' financial statements, along with their own consolidated financials, as part of their report to the SEC, usually in their 10-Q or 10-K. That reporting is typically included as an exhibit and would, in essence, approximate the look and feel of a combined financial statement.

Don't Jam a Combined Peg into a Consolidated Hole

One of the biggest issues we see in combined financial statements stems from a group's reporting processes and systems. Let's say you're a new controller for a group and inherit the existing accounting systems and processes. Shortly after you start your new job, new regulatory requirements come out, mandating combined financials for the different entities in your group. Without something as basic as segmented general ledgers across those various entities, trying to extract data designed for consolidated reporting to use for the new combined statement requirements could be a monumental task.

In our example, unless the exiting controller saw the regulatory writing on the wall and implemented new accounting procedures to create separate GLs for the entities, it's going to be a tough few months for the accounting team. Keep your head on a swivel and prepare as much as possible in advance for any changes to your required reporting. Splitting out transactions from a consolidated GL for combined financial statements is a great way to burn out your team and lose the operating efficiencies so vital to sound finance and accounting functions.

Alternatively, let's say you're a major player in the thriving widget market and sell your popular line of widgets through retail stores. If you already record all of your activity at the store level, then generating combined financial statements won't be much of an issue. It's going the other direction, using consolidated data for combined purposes, that can wreak havoc on your time, patience, and resources.

To throw a slight wrench into things, some people refer to “combined financials” when they actually mean special purpose statements. Special purpose financial statements are used to satisfy reporting requirements that consolidate entities outside of ASC 810's guidance. These are usually reporting requirements for a joint venture, tax reporting, or other industry specific reporting. In these cases, special purpose financials take the different portions of the company and combine them in a subjective, often ad hoc way that's outside of 810's purview.

As we said, special purpose reporting is common amongst joint ventures and other types of special agreements between businesses, where the joint venture members combine the involved transactions into a single set of financial statements. For instance, if a company has five subsidiaries but only two of them are involved in a specific joint venture, special purpose financials would consolidate the information for those two subsidiaries but exclude the others.

In this instance, it's important to include an explanatory paragraph or footnote in the statements – particularly for audit purposes – that clearly states that the combined financials are not in accordance with ASC 810 and are purely for a specific contract or some other ad hoc reporting requirement.

We understand that our high-level look at consolidated and combined financial statements might have felt like an information tsunami, so a handful of best practices should help flesh everything out and put it into context.

For consolidated financials, following a sequence of decisions should significantly streamline the process.

Aside from that series of decisions, also make sure everyone involved understands the reporting deadlines so the subsidiaries get the parent company all required information far enough in advance. That way, the parent can adequately review the data and ensure they have everything needed for the reporting requirements as well as the time required to eliminate those pesky intercompany transactions.

Far and away the best advice we have for combined financial reporting is something we've already touched on – the nature of your financial/transactional data. If you're a controller or CFO and see the need for combined financials lurking just over the horizon, start putting the proper systems and procedures in place to give your team the very best chance for smooth and silky success. This means implementing whatever is necessary to capture sufficient detail in your data. Otherwise, the manual adjustments needed to isolate that level of detail from a consolidated reporting system – we're looking at you, general ledger – can often feel overwhelming to a team that already has their routine daily tasks and responsibilities to handle.

Although this can apply to combined reporting as well, if a group of subsidiaries included in special purpose financials have a cash concentration and sweep arrangement, there's likely to be some complications in the Statement of Cash Flows. Remember, eliminating intercompany transactions only occurs in consolidated reporting, not for combined or special purpose financials. Therefore, when the need arises, be sure to include any large payables to or receivables from the parent on your financials. Also, provide adequate disclosure regarding collectability, intent to pay, or valuation, especially since to/from accounts can occupy a healthy portion of the balance sheet.

Yes, this was a lot to take in, but we wanted to provide some practical guidance that's a bit hard to come by out there on the interwebs. However, whether for consolidated or combined purposes – or any other reason, for that matter – if you find your systems a bit too archaic, data on the messy side, or just in need of some good ol' fashioned guidance, Embark is always here to lead you through the accounting darkness.