The RPA Maturity Curve: A CFO's Path to Automation Glory 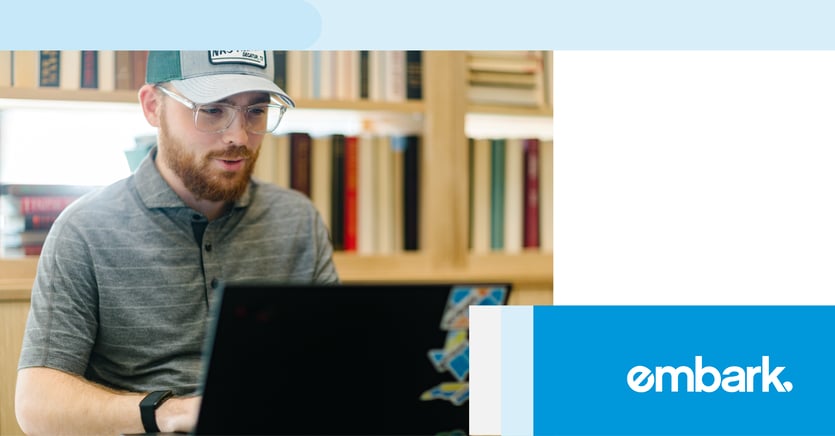 Here's one to chew on – automating a single ten-minute daily task saves you a week's worth of work over a year. Multiply that by the too-many-to-count manual processes still festering in your accounting or finance functions and you're left with a pretty staggering cost and time savings.

That's exactly why Robotic Process Automation (RPA) has been such a caffeinated jolt for CFOs and their teams, and a remarkably cost-effective one at that. In fact, unlike many other technology solutions, RPA’s price is closer to that of a used station wagon with 200,000 miles and a cranky transmission – very affordable. From the get-go, the technology can quickly and efficiently take those countless tedious tasks off your people’s collective plate so they can spend their time actually analyzing and innovating.

However, while RPA isn't necessarily complicated, it can still feel overwhelming if you're on the outside looking in. So to help you realize all of that delicious efficiency, we're walking you through our RPA maturity model to ensure you have a keen sense of direction throughout your automation trek.

Before we dive in, let's discuss what RPA is and, just as importantly, what it isn't. Think of RPA as a robotic workforce, one that can handle all of those manual tasks – big and small – that have a way of devouring entire work days. These tasks can be as simple as automatically closing frozen applications, downloading bank statements every morning, or processing digital mountains of invoices.

Given its flexibility and potential scope, though, a list of RPA use cases could go on for miles. For CFOs, these digital works, commonly referred to as “bots”, are especially adept at streamlining the time vacuums lingering in order-to-cash, procure-to-pay, record-to-report, and month-end close procedures. But that's still just scratching the surface of what RPA tools can bring to accounting and finance, not to mention the rest of the organization once other business units see how simple and effective RPA can be.

That said, we feel it's important to level-set before jumping into the maturity model. First and foremost, RPA isn't a replacement for your team. So, to squelch a common fear, bots aren't waging a Terminator-style war against your accounting and finance people. In fact, it's freeing them from that relentless tedium – tasks they likely despise in the first place – to add genuine value to your enterprise.

Further, since "RPA" has become a bit of a catch-all in recent years, we also want to point out that our use of the term doesn't include APA (analytic process automation), machine learning, or other technologies higher up the analytics food chain. For our purposes, RPA is just that – RPA. That said, we'll discuss moving up the business intelligence curve – by marching toward advanced analytics grandeur – in a bit.

Now that our preamble is out of the way, let's get into it. And that means touching on the importance of looking at RPA adoption, implementation, and advancement as a dynamic curve rather than a singular point. For instance, if you're new to all things automation, you're obviously going to begin at the beginning of the curve. Alternatively, if you've already dipped your toe into the RPA pool, the second stage may be a better beginning spot for you.

The point is, no matter where you are on your automation journey, there's an appropriate stage to build from, one that exists on a continually rising pathway. Therefore, as we get into the actual stages, we recommend looking through our insights and conducting an RPA maturity assessment, ideally, with an outside specialist to determine the most appropriate plan forward.

For the sake of thoroughness, efficiency, and positive impact, if you're unsure which of the stages in the following graphic is most appropriate for you, start at the beginning to ensure you dot every i and cross every t.

You must walk before you run. Therefore, before you start realizing all of that automated goodness, you have to figure out what to automate in the first place. Granted, as an automation strategy noob, the list of potential automated processes and tasks probably goes on for a country mile. And that's okay.

However, to prevent yourself from getting overwhelmed right out of the gate, we recommend starting with the low-hanging fruit. The aforementioned frozen applications, bank statements, and invoices are all straightforward but extremely useful ways to deploy RPA. If you'd prefer to start even more micro, your team members can use simple bots to automatically open specific browser tabs or apps as soon as they open their laptops in the morning.

In general, CFOs and their teams are best off by starting their RPA journey with back-office processes. Since these tasks tend to be very repetitive and structured, they're an obvious target for your first simple bots. Also, since tasks like invoice processing and downloading bank statements only directly impact the finance organization, this restrained rollout allows you to corral risk and work out any kinks without affecting other business units in the enterprise.

Other actions to aim for in this initial stage include:

Thankfully, since you started with the low-hanging fruit, you were able to find some quick and easy RPA wins to build from. Thus, rather than swinging for bloop singles just over the shortstop's head, you should now have the confidence to aim for doubles in the gaps.

Specifically, business processes that are more dynamic than your stage one targets – yet still frequent and repetitive – are ripe for the picking. This is where you would start deploying bots in areas like inventory management, supply and demand forecasting, or even certain components of the vendor selection process.

Like deployments from the previous stage, your stage two bots are helping you reduce costs, eliminate human error, and propel new efficiencies by taking repetitious, tedious tasks out of the operational equation. In turn, you're allowing your team members to prove their mettle and stretch their wings, thus, driving employee engagement in an era where top talent is hard to come by.

Other insights for stage two on the RPA maturity curve include:

Up to and including stage two, you've played it fairly safe, a tactic that will now pay off as you start looking toward front office operations for potential RPA deployment. Sure, you're taking on a bit more risk in this critical stage. However, assuming you've been careful and methodical at every turn, automating critical partner and customer-facing processes is essential in truly realizing the immense value RPA can bring to your enterprise.

This can be a scarier step for companies without a strong digital foundation or tech stack already in place. In other words, if a digital transformation is still a planning point for the future, then you likely have no data culture to speak of right now. Therefore, you're probably staring a metric ton of information silos, a messy data environment, and disconnected systems squarely in the face, making automated front office processes quite foreign, perhaps even overwhelming.

At stage three, it's time to increase your pace to a swift jog and start strategizing for the bigger picture. In this case, that picture is a transformed enterprise that builds on continued RPA success, using it as a springboard away from descriptive tools to more prescriptive ones. Spoiler alert – that's the entire crux of stage four.

So here we are – stage four, the final level of maturity on our curve. But rather than looking at this point as the finish line, it's really more of a starting line for hyper-efficient workflows and your bigger transformation dreams.

Yes, technically speaking, you could sit on your laurels and enjoy all of the benefits and efficiencies RPA has brought to your people and processes thus far. However, that would be like walking away from a four-course meal at a Michelin-starred restaurant halfway through your salad. And that's no fun.

Instead, take a look at our business intelligence curve and see just how beneficial a continued path down the analytics highway can be for your people and stakeholders. 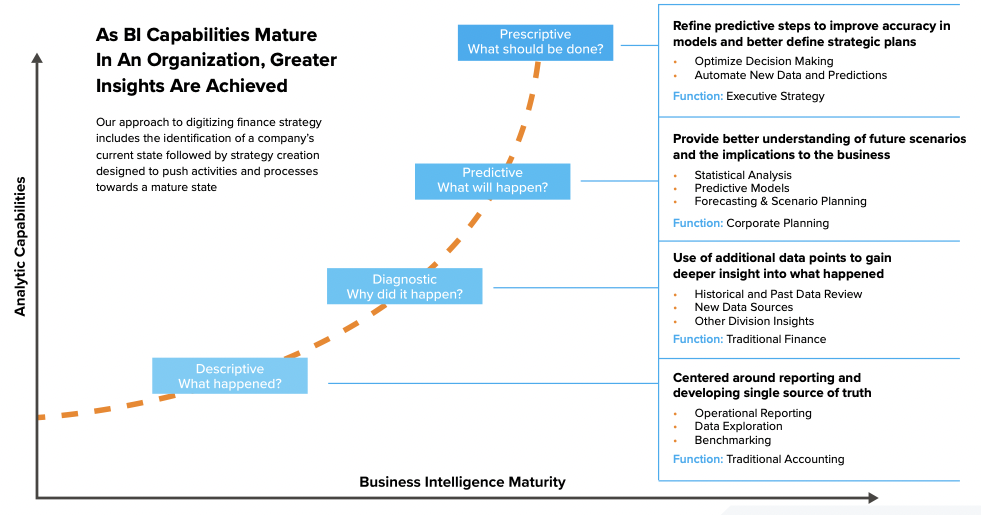 Granted, successfully adopting RPA doesn't put much of a dent in the BI curve, but Rome wasn't built in a day. At the very least, you've given your people and decision-makers a taste of what's to come, where an expanded APA framework with intelligent automation, visualization tools, and a streamlined data environment and systems lead to even greater efficiencies.

Oh, and did we mention what this means for your FP&A modeling and, in turn, your decision-making? Long story short – it's a game changer if there ever was one. But as tempting as it might be, let's not put the cart before the horse.

Thus, building a solid foundation is the first critical step toward advanced analytics and generating genuine business intelligence. And as we've already said a number of times, RPA is an essential component of that foundation. Get it right, and the future looks bright. Get it wrong, and risk standing in place as the competition starts generating the types of forward-looking insights you dream about.

We're still not quite done with what we have to say about your initial steps into the RPA maturity curve. But since you've been quite the trooper for sticking it out this long, let's wrap things up with a few sage bullet points.

As always, if you don't have the bandwidth or in-house expertise to conquer RPA – or the glimmering analytics jewels behind it – the automation specialists on our Business Transformation team are ready, willing, and able to step in and lead you to the promised land. It's what we do best.