Embark’s Bringing the Heat to the Phoenix Market 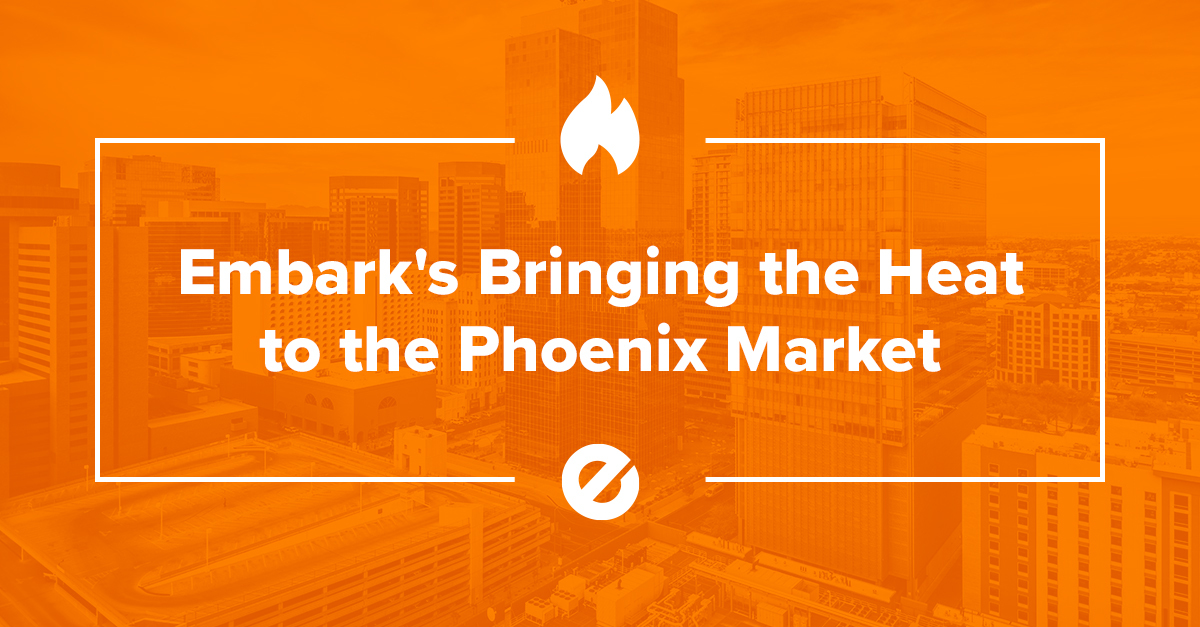 The Great American Southwest. Vast blue skies, rugged terrain, and a certain spirit. And what a spirit it is, propelled by the thought of endless opportunity and growth. Pretty much sums up the Southwest, right? And as the economic epicenter of all that opportunity and growth, Phoenix is a critical new market for Embark in our meticulous but unstoppable expansion.

Aside from the amazing scenery and wonderful people, though, there are some special traits that make the fifth largest city in the US especially noteworthy for us here at Embark. So we wanted to take some time to explain why Phoenix is such an essential market for us, and introduce you to Mary Thompson, SVP of Market Development and one of our newest Embarkers, who will be leading our charge in the Valley of the Sun.

The Ideal Leader for the Phoenix Market

Phoenix is a dynamic city. An economic hub that grows by the day, it’s become a dominant force in the west in the last couple of decades. Obviously, with such a bright spotlight sitting over the market, it only makes sense to have an equally dynamic, motivated, and charismatic leader at the helm. And that’s Mary Thompson in a nutshell.

A native of Southern California, Mary’s background, career, and personality make her an ideal fit for both the Phoenix metropolitan area as well as everything we stand and strive for at Embark. In fact, after earning her bachelor’s degree in Accounting from USC, she began her career with Deloitte, first in LA and later in – you guessed it – Phoenix.

From there, she obtained her CPA license and earned an MBA from ASU – fork ‘em, Sparky! – also transitioning her career path toward a bold and exciting new direction – professional sports. Of course, as you might know, Embark wears its love for sports on its sleeve with a number of collegiate athletes – including Mary – roaming our offices. And it doesn’t take much to prod us onto the links.

The point is, having spent nearly a decade in professional sports as the Controller for the Phoenix Suns and Senior Manager of Financial Reporting for the San Francisco 49ers, Mary’s career trajectory is the envy of almost everyone we know. But after a few years in the City by the Bay, Phoenix came calling again, this time leading Mary to a series of positions that would include Corporate Controller for a non-profit, CFO for a subsidiary of a large public entity and, later, CAO for the parent company.

That’s where Embark’s entry into the Phoenix market steps into the picture, where Mary soon came to love our culture, innovative mindset, and devotion to our people, all making Embark literally a Great Place to Work. And as we look down the road a bit, we can’t help but feel equal parts excited and grateful to have a leader with Mary’s experience and skillset at the wheel, guiding us along I-10 and into a powerful new market.

So what, exactly, does this sun-soaked, bustling metropolis provide Embark? Honestly, the list is so long, it’s tough to even know where to start. First and foremost, it’s a region that’s growing off the charts, clocking the most growth for a US city for four consecutive years and counting.

But Phoenix is so much more than growth statistics. A spectrum of industries gravitate toward its business-friendly stance and inherently innovative perspective, making it the place-to-be for healthcare, technology, and financial services companies, not to mention its thriving real estate market.

Zeroing in on financial services, Arizona was the first state in the country to establish a Regulatory Sandbox Program (RSP), allowing companies to test cutting-edge products and tech solutions before jumping into the time-consuming, restraining license and authorization process. Needless to say, that’s one of the many reasons why Phoenix is a global FinTech leader. And it just so happens that quite a few Embarkers have extensive experience either working in or auditing financial services.

While such dynamic growth and fertile business opportunities are obviously attractive, perhaps what’s most exciting about Phoenix is the seamless work-life integration awaiting Mary and our future Arizonan Embarkers. The general Phoenix area, including everything from Chandler to Anthem, Mesa to Buckeye, offers sports, culture, amazing food, immaculate weather – it’s a dry heat – and more nature than you can shake a stick at. For Embarkers, that means there’s no shortage of places and things to experience across the valley and beyond.

Being a company with such an intense focus on our people, culture, and leadership, a satisfying lifestyle is just as important – if not more so – than the business opportunities for Embark. Because as we’ve said countless times before, happy people create happy clients. And just looking at our expansion thus far, most recently into Phoenix and Salt Lake City but Denver, Oklahoma, Austin, and Houston as well – with more on the horizon – we’re obviously doing something right.

And maybe the best thing of all – we’re still just getting started. But for now, we’re relishing our entry into the great city of Phoenix, a market that already feels like home, and staring an extremely bright future in the eye. With experience and expertise from people like Mary Thompson guiding our way, can you blame us?